In the 1982 MGM comedy film “My Favorite Year,” a young production assistant is charged with the responsibility of keeping tabs on a famous but famously trouble-prone British actor who has been brought to New York to make a guest appearance on a TV comedy show.

Steve Lott can relate although he wasn’t buckled to a famous actor but to a prizefighter who became more famous than any actor you could name. When Mike Tyson was climbing the ladder, no one was closer to Mike than Steve Lott. When Mike needed a place to crash, he went to Steve’s apartment and crashed on the couch.

Steve Lott now lives in Las Vegas where he is president of the Boxing Hall of Fame Las Vegas which controls one of the world’s most valuable sports libraries, the enormous Big Fights Inc. library of legendary fight films and photos, the rights to which were sold to ESPN but with Lott retaining the exclusive Boxing Hall of Fame rights, world-wide. The company also licenses films and photos to various documentary film productions.

There’s a story there, but let’s start at the beginning.

As a teenager growing up in a working-class family in the Bronx, Lott became a whiz at the sport of handball. At the junior level, he was once ranked the #1 singles player in the world. Jim Jacobs, a legend in the sport – arguably the best handball player of all time – took Lott under his wing.

Growing up in Los Angeles, Jim Jacobs was an obsessive collector of old fight films. He eventually hooked up with Bill Cayton, the owner of a successful New York City advertising agency and they formed a company called Big Fights Inc. When Jacobs moved to New York, he lived for a time with boxing trainer Cus D’Amato who had molded Floyd Patterson and Jose Torres into world champions. When D’Amato moved upstate to Catskill and took to coaching amateurs, Jacobs and Cayton funded his training camp.

Steve Lott had one year of college under his belt and was working as a salesman at an auto dealership when he approached Jacobs about working for Big Fights Inc. Jacobs hired him and Lott’s life would get a lot more exciting.

Jacobs and Cayton eventually branched into fight management. They purchased the contract of the great Puerto Rican boxer Wilfred Benitez who became their first client in what would become a small and select stable. Lott’s duties shifted to that of camp coordinator. His title was that of assistant trainer but his responsibilities were more diffuse including dealing with the media. In time, he became referenced as Tyson’s assistant manager.

The Mike Tyson saga has been well-documented. A pre-teen thug on the streets of Bedford-Stuyvesant and Brownsville, Brooklyn, seemingly incorrigible, Tyson became the surrogate son of Cus D’Amato who entrusted Mike’s boxing career to Jacobs and Cayton. He turned pro at age eighteen after losing in the finals of the Olympic Box-Offs, won his first 19 pro fights by KO, 12 in the opening round, and became the undisputed world heavyweight champion shortly after his 21st birthday. Beyond that, Tyson had the “it” factor that made him a media darling, the world’s most talked-about athlete.

The town of Catskill, New York, is roughly two hours from Manhattan. When Tyson came to the city, Lott’s apartment was his crash pad. During his first year as a pro, Tyson had a frenetic schedule. He averaged a fight every three-and-a-half weeks. But as he advanced, the gaps between fights became longer and a night’s sleepover often evolved into something longer, perhaps a three-day or five-day stay.

In those days, remembers Lott, Mike Tyson had no car, no jewelry, no expensive clothing. “Mike didn’t care about money,” says Lott. “He cared about his legacy. He wanted to be remembered like Jack Dempsey and Joe Louis.”

He certainly wasn’t a party animal. His hobby, as it were, was watching old fight films or riffing through the pages of The Ring record book. In Lott’s estimation, young Tyson made himself into the world’s foremost boxing historian. “If you showed him a picture of an old-time fighter, he could not only identify him but tell you something about him.”

Tyson’s ascent to superstardom was so fast that Lott was blindsided by it. “When we first started hanging out,” says Lott, “I never envisioned that Mike would become so big. He was just my friend. Then one day it dawned on me that I had been entrusted with the most valuable commodity in sports. It was as if Mickey Mantle was crashing on my couch the year after he won the triple crown.”

It was bigger than that. Mickey Mantle wasn’t a name that resonated in most parts of the world. Mike Tyson was an international celebrity. “Mike was cool as a cucumber waiting in the dressing room before a fight,” says Lott, “but I was a nervous wreck. I knew that in this sport one punch can ruin a career.”

Tyson’s ring walk was famously spartan: “plain black trunks, no robe, no socks, no nonsense.” There was no entourage. “There were only three of us that accompanied Mike on his ring walk,” remembers Lott. “His trainer Kevin Rooney, his cut man Mike Baransky, and myself.” (In the photo, that’s Rooney on the left, Baransky on the right, and Lott in the middle.)

That was the foursome that prevailed through Iron Mike’s famous fight with Michael Spinks. But during the prologue there were dark clouds on the horizon. A palace coup was brewing and the insurgents were hell-bent on cleaving Tyson from his handlers.

Three months before the Tyson-Spinks fight, Jim Jacobs passed away at age 58 from complications of leukemia. Cus D’Amato was already gone, having passed away two-and-a-half years earlier. These men were Tyson’s primary role models. Without them, he was adrift, or so it would be written. But in theory he wasn’t rudderless at all because he was now a married man. On Feb. 7, 1988, seven weeks before Jim Jacobs died, Mike married Robin Givens after a 10-month courtship.

Tyson’s wife was a knockout in her own right as she would show the world in a 1994 Playboy pictorial and she was well-educated, having graduated from high school at age 15 and having attended tony Sarah Lawrence College which had the highest tuition of any college in the country.

There was nothing quite like Robin Givens back on Tyson’s old turf in gritty Bed-Stuy. As Frank Sinatra would have said, Robin Givens was one classy broad. 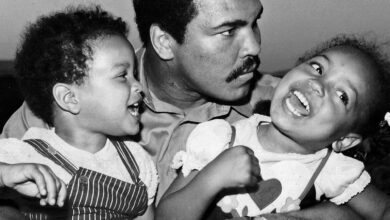 RING KING My dad Muhammad Ali loved watching himself on TV…’weren’t I something’, he’d say to us 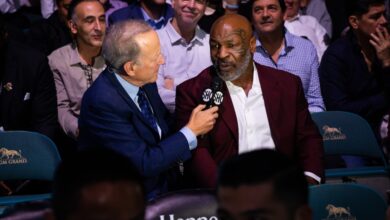 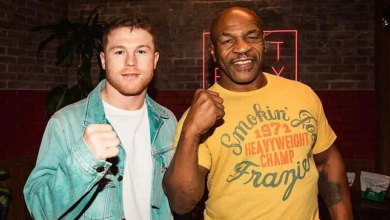