Former boxing world champion Mike Tyson was a storybook sports hero. From the most humble of beginnings he made it to the top, but his self-destructive tendencies held him back and consistently proved his undoing.

“I was a titan, the reincarnation of Alexander the Great,” Mike Tyson wrote in his autobiography ‘Undisputed Truth.’

“My style was impetuous, my defenses were impregnable, and I was ferocious. It’s amazing how low self-esteem and a huge ego can give you delusions of grandeur.”

Tyson could have been a living legend. A champion at 20, he had a distinctive punch and the speed of a lightweight with unrivalled agility and flawless coverage.

He was undefeated in his 37 professional fights, winning the first 19 all by knockout. It wasn’t until February 1990 that he was knocked out for the first time against James “Buster” Douglas.

Michael Gerald Tyson was born on June 30, 1966 in Brooklyn, New York into difficult family circumstances. He does not know his father, who left the family. His single, drug-addicted mother died when he was 16.

Tyson’s boxing coach and mentor at the time, Cus D’Amato, spotted something in the young boxer, who often had trouble with the police. D’Amato took Tyson under his wing and became his legal guardian, and the two maintained a close relationship.

D’Amato saw in Tyson the talent and obsession that would make him a champion — even though Tyson is actually too small for the heavyweight class.

“I believe that a person dies when they no longer want to live, but I have a reason with Mike. And he gives me the motivation. I will stay alive and I will watch him become a success because I will not leave until that happens,” D’Amato once explained. He died at the age of 77, a year before Tyson’s first championship fight.

“Cus D’Amato, my mentor, friend, and general. Because of you, my life has reached heights I could never have imagined. Without you, I don’t know where I would be today. My gratitude to you is immeasurable,” Tyson would later write in his autobiography.

In the ring, Tyson exhibited pure power, wild determination and flawless technique. Outside of it though, he made many missteps. Violence and brutality, alcohol and drug abuse, convictions, prison sentences, a bitten ear, a doping scandal and debts — those also represented Mike Tyson.

He was 25 when he was convicted of raping a Miss Black America contestant in March 1992. He served a six-year prison sentence, three of which were on probation.

In March 1995, Tyson was released on probation and successfully returned to the ring. He became the WBC heavyweight champion once again in March 1996 after a technical knockout win against Frank Bruno. In September that same year, he also recaptured the WBA title after defeating Bruce Seldon.

A defeat to Evander Holyfield in November 1996 lost him the WBA belt again. He had the chance to win it back eight months later, but the rematch was a disaster.

Tyson bit a chunk of Holyfield’s ear off in the third round — one of the most infamous moments in sports history. Not only did he surrender the chance to reclaim the WBA title, but he was also was disqualified, banned for 15 months and had to pay a $3 million fine.

With his reputation damaged, Tyson’s life and boxing career in the following years were turbulent. His boxing license was restored after he served a 15-month ban, he defeated Francois Botha but was sent to prison again for a year after being convicted of assault.

Since serving his sentence, Tyson had only returned to the ring nine times. His biggest loss during that period was to three-time world champion Lennox Lewis in June 2002.

Troubled with financial difficulties, he declared bankruptcy. He attempted a desperate comeback in 2004 but lost to the largely unknown Danny Williams by knockout. In June 2005, after losing to Kevin McBride, Tyson decided to hang up his gloves and retire.

Tyson’s life was touched by tragedy again when, a few days before his wedding to his current wife in 2009, his four-year-old daughter Exodus was killed in a freak accident on a treadmill.

Tyson admitted his addiction to alcohol, but after a spell in rehab, starred in films, published a book and created his own television show. He became vegan and began training again this year. Tyson is now 54 and has found happiness in his personal life, and has been married for 11 years to his current wife Lakiha Spicer, with whom he has two children.

In July, he announced he would make another comeback and fight former four-division world champion Roy Jones Jr. The fight was initially scheduled for mid-September but was moved to November 28 due to the coronavirus pandemic. MIKE TYSON VS. DEONTAY WILDER OR TYSON FURY – STOP IT! 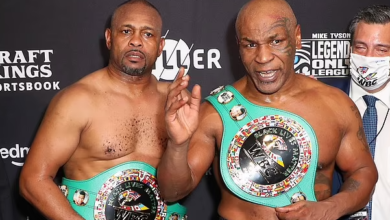 Pacquiao to get WBA Champion for Life belt