While Mike Tyson earned considerably more over the course of his career, his current net worth is a third of the size of Jake Paul’s, despite the fact the 24-year-old has only been boxing for two years

Jake Paul has amassed a fortune three times the size of Mike Tyson’s despite the fact he’s only 24-years-old.

The YouTuber-turned-boxer has only had four fights in his young boxing career – and is set for a fifth against Tyron Woodley this weekend – but it’s understood he already has a net worth of around $30 million (£22m).

This dwarfs Tyson’s reported $10 million (£7.5m ) net worth – although the former heavyweight champion of the world earned considerably more back in his heyday.

Forbes claim ‘Iron Mike’ earned an eye-watering $685million (£475m) over the course of his stellar career, but lost the vast majority of it through frivolous spending, court costs and expensive divorces.

Though the 55-year-old has been on the straight-and-narrow in recent years and even made a sensational return to boxing last year, taking part in an exhibition bout against Roy Jones Jr.

Tyson’s wealth has stabilised in the past decade after appearing in a few Hollywood films, most notably The Hangover.

He also runs his own cannabis farm called the Tyson Ranch, where he grows and sells his own brand of weed as well as weed-based wellness products – which reportedly earns him around $500,000 (£375k) every month.

Paul, along with his brother and fellow YouTuber-turned-boxer Logan, has garnered mass media attention since embarking on a combat career in 2020.

He was set to face Tyson Fury’s brother Tommy this weekend, but the Englishman was forced to pull out after picking up an injury during training.

The brash youngster has four wins from four fights, though is yet to face a ‘proper’ boxer having recorded victories over a former MMA fighter, a former NBA star and a former YouTuber.

Manny Pacquiao Shares Wish & This Is How He Celebrated His Birthday

Mike Tyson net worth: The boxing icon is this wealthy 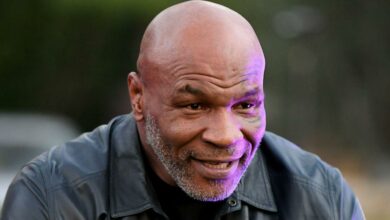 Listen to Mike Tyson Describe ‘Dying’ Every Time He Meditates