Mike Tyson once accused Donald Trump of having an affair with his wife.

The youngest heavyweight boxing champion in history apparently stormed into the former President’s office and demanded to know if he had slept with his wife at the time, Robin Givens.

Tim O’Brien wrote a book called ‘TrumpNation: The Art of Being the Donald’, which documents the life and experiences of the businessman and ex-leader of the United States.

An excerpt from the book quoted Tyson as saying: “Could I ask you, are you f***ing my wife?”

O’Brien then quotes Trump’s response which read: “Now, if I froze, I’m dead… you would have zero chance.

“Here’s the heavyweight champion of the world, and he’s a solid piece of f*g armour.”

An article in The New York Post that focuses on the story, says Trump’s response to Tyson’s question is unknown.

Trump had a hand in the former boxer’s first world title win, organising his fight against Michael Spinks in June 1988. 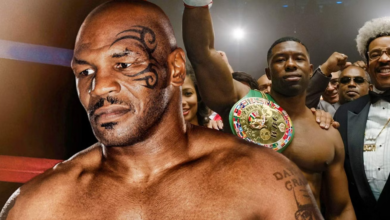