The rivalry between The Undertaker and Kane is one of the greatest feuds in WWE history. The brothers have feuded countless times over the years, but which rivalry stood head and shoulders above the rest?

In 1997, Paul Bearer masterfully planted the seeds for the legendary rivalry between The Undertaker and Kane. Bearer would blackmail Undertaker if the Phenom did not listen to his former manager. Their relationship broke down, and Bearer revealed Undertaker’s dark secret about destroying the funeral home and killing his parents. Nevertheless, Undertaker and Kane’s rivalry has gone on to become one of the greatest feuds in WWE history.

Both wrestlers have been cast as a babyface and as a heel in their feud to freshen things up. They’ve battled over World Championships, clashed at a couple of WrestleManias, and had marquee matches with stakes on the line. Whilst, their matches haven’t always been instant classics, their feuds have always kept fans entertained to see these two giants go head-to-head.

On the August 14, 2000, edition of Raw, Kane “saved” his brother The Undertaker from Chris Benoit and Shane McMahon’s clutches. However, it was a ruse as the Big Red Machine randomly turned heel by chokeslamming The Undertaker with authority. The second Chokeslam was explosive as he chokeslammed The Undertaker through the ring.

This was one of their worst feuds together, and their marquee match at SummerSlam was underwhelming. Undertaker was obsessed with removing his brother’s mask throughout the contest. He succeeded, and Kane fled the scene. There was no definitive winner in this match, and their paths continued to cross briefly in multi-man matches for the WWE Championship. Nonetheless, the Brothers of Destruction put their differences aside, as they reunited in the 2001 Royal Rumble match by wreaking havoc.

The match plodded on, and it was a bore-fest with Paul Bearer turning his back on Kane to realign himself with Undertaker. Kane and Undertaker’s series of matches was atrocious in this period of their feud. They clashed in a casket match which they broke. They met in the quarterfinals stage of the WWE Championship tournament at Survivor Series with Undertaker beating Kane once again. However, at Rock Bottom: In Your House, Kane interfered in Undertaker’s Buried Alive match with Austin. Kane planted Undertaker with a Tombstone on the gravesite, and Austin took advantage by prevailing. They clashed in an Inferno match on the February 22, 1999, edition of Raw which ironically was Undertaker’s first match since the Buried Alive match, and it was average.

Despite being on different brands, The Undertaker and Kane reignited their feud once more at Survivor Series 2003. The Undertaker was close to putting Mr. McMahon away in their Buried Alive match, but Kane intervened and aided the Chairman of the Board. This was the final time that Undertaker was in his American Badass gimmick, as Kane removed his bandana when he placed him in the grave.

Nevertheless, the plants were seeded for Kane and The Undertaker’s rematch at WrestleMania 20. The Undertaker played mind games with his younger brother, and his gong in the 2004 Royal Rumble match distracted Kane. Ultimately, Undertaker made his return after a four-month absence at WrestleMania 20. It was the return of the Deadman which fans were pleased to see. Undertaker was back alongside Paul Bearer, and it was the perfect way to reintroduce the Deadman. The wrestling wasn’t pretty in their WrestleMania 20 outing, but it didn’t have to be as Undertaker eased his way past Kane, sealing the deal with his patented Tombstone Piledriver to extend his WrestleMania unbeaten streak to 12-0.

Six years removed from their WrestleMania 20 encounter, Undertaker and Kane were once again at loggerheads in 2010. The Devil’s Favorite Demon held the holy grail which is the World Heavyweight Championship. Undertaker was in a vegetative state, and it was revealed that Kane was the one behind it. It was the major title program on SmackDown, and their trilogy of matches was not great.

Kane defeated Undertaker cleanly to retain the World Heavyweight Title in a No Holds Barred match at Night of Champions. Paul Bearer was featured heavily in this feud. He returned after shedding a lot of weight, and he was on Undertaker’s side. However, in the closing stages of their Hell in a Cell match, Bearer realigned himself with his son, by handing Kane the urn. For the second pay-per-view in a row, Kane got the better of Undertaker. Their third and final match was a Buried Alive match at Bragging Rights which seemed ironic. Kane cost Undertaker a couple of Buried Alive matches in the past, and he was looking for revenge. All thanks to interference from The Nexus, Kane scored his third straight victory over Undertaker to bring their final feud to bed.

At Badd Blood: In Your House, Kane marched down to ringside with the evil Paul Bearer by his side. He ripped the cell door right off its hinges, and he had a staredown with The Undertaker. Kane planted Undertaker with the Tombstone, which led to Shawn Michaels winning the match and becoming the number one contender for Bret Hart’s WWE Championship.

Kane aided Undertaker in his casket match with Michaels for the WWE Title at the 1998 Royal Rumble, but it was a ruse. The Big Red Machine and Bearer set the casket ablaze afterward. Finally, the two locked horns in a remarkable match at WrestleMania 14. It’s arguably their best match against one another, and it took Undertaker three Tombstones to put Kane away. A month later, they took their rivalry up a notch by facing off in the inaugural Inferno match. Once again, Undertaker prevailed by setting Kane’s arm on fire. However, Kane managed to clinch his first victory over Undertaker on the June 1, 1998, edition of Raw. Kane was the number one contender for Steve Austin’s WWE Championship. Moreover, they briefly feuded over the WWE Tag Team Championship with Kane and Mankind dropping the titles to Undertaker and Steve Austin. 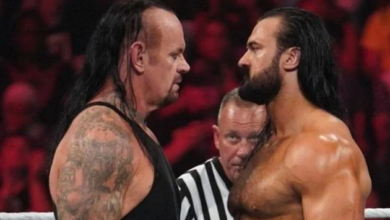 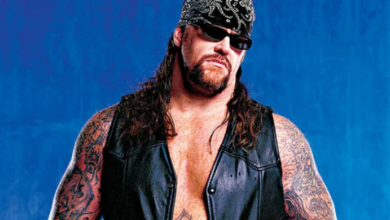 Real Reason the Undertaker Transformed His Character Into the American Badass