Manila – Philippines presidential hopeful Manny Pacquiao says he was ’naive’ and ignorant of the law when he took crystal meth in his youth, but argues offenders today know drugs are illegal and should be punished.

Pacquiao, a retired world champion boxer, has been a high-profile backer of President Rodrigo Duterte’s brutal war on drugs that has killed thousands of people.

But in the lead up to the 2022 elections, Pacquiao has sought to distance himself from the outgoing Duterte, who is facing an international probe into his bloody crackdown, and now says offenders should have a “chance to defend themselves”.

“We have to put in jail those who are using drugs, selling drugs — that’s what the law says,” he told AFP, vowing to continue the anti-narcotics campaign “in the right way”.

“Before, I’m naive, that’s why I use drugs… I don’t know the law,” said Pacquiao, 42, who currently holds a seat in the Senate and previously served two terms in Congress.

Nowadays, “people, they know already that the law is not allowing the illegal drugs.”

Pacquiao shocked the sporting world in 2016 when he admitted using marijuana and shabu, the local name for cheap and highly addictive crystal meth, as a teenager.

Known for his rags-to-riches rise from street kid to one of the greatest pound-for-pound boxers of all time, Pacquiao has made fighting drugs, corruption and poverty key themes of his campaign to succeed Duterte.

While victory for Pacquiao is not unrealistic in a country famed for its celebrity-obsessed politics, he faces a tough fight.

Ferdinand Marcos Jr, the son and namesake of the nation’s former dictator, was the top preference for president with 47 percent.

Sitting in front of a teleprompter in his luxury mansion in the capital Manila, Pacquiao dismissed his poor showing and insisted his “Man of Destiny” campaign for the top job would go on.

“I’m not thinking about backing out,” he said, as a bevy of staff hovered around his home in a secured enclave of billionaires and foreign ambassadors.

Fans in the poverty-afflicted nation see the former boxer as living proof that success is possible for anyone who works hard, no matter their origins.

But as a politician and fervent evangelical Christian, Pacquiao has stirred controversy with his support for Duterte’s drug war and push to restore the death penalty, as well as his admission of past drug use, and previous homophobic comments.

Critics accuse the high-school dropout of lacking intellect and barely turning up to sessions in Congress and the Senate, raising questions about his ability to run the country of 110 million people.

And he risked political capital this year in a public falling out with Duterte, who rivals Pacquiao for the affections of many Filipinos.

“He might be popular with the masses, but so are some of these other candidates,” said Ted Lerner, a US-born sports journalist in the Philippines, predicting a return to the ring for the boxing great.

“Just look at the surveys — it doesn’t bode well at all for him.”

Whoever wins the presidency may have to grapple with an International Criminal Court investigation into Duterte’s drug war, which rights groups estimate has killed tens of thousands of mostly poor men.

Duterte, who yanked Manila out of the ICC after it launched a preliminary probe into his deadly signature policy, has insisted it has no jurisdiction in the Philippines and he would not cooperate.

Asked if he would protect Duterte from prosecution if elected president, Pacquiao said he would “obey” the law, and was adamant that the Southeast Asian nation was still a member of the ICC.

A glittering decades-long career in the ring brought Pacquiao fame and fortune — as well as the vices of booze, gambling and infidelity that nearly wrecked his marriage before he found religion.

Two months after hanging up his gloves, Pacquiao said a comeback was not on the cards — even if he lost the election.

Pacquiao has served as a celebrity endorser for products ranging from appliances to pizza and cars, hosted TV shows, and even founded his own cryptocurrency, the “PAC Token”.

If his presidential bid fails, he plans to add farmer to his CV, growing fruit on a 20-hectare (50-acre) property in the southern province of Sarangani.

“It’s also quiet (there), I like that,” he said, before opening his smartphone and playing a country music ballad. 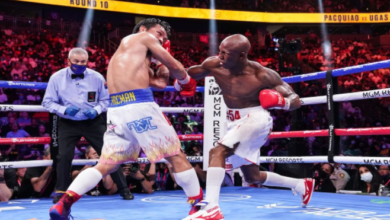 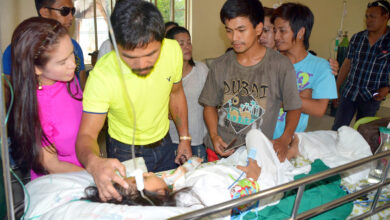 Pacquiao puts “life on the line” to help