MANILA, Feb 16 – Philippines boxing icon and presidential candidate Manny Pacquiao said he will welcome an international probe into President Rodrigo Duterte’s bloody war on drugs if elected, and promised to fight narcotics “the right way”, with due process, not street shootings.

In remarks this week to foreign journalists, Pacquiao, a former multi-division world boxing champion and once a staunch ally of the president, said he would be open to rejoining the International Criminal Court (ICC), which Duterte unilaterally withdrew the Philippines from in 2018.

Pacman, as he is known in the Philippines, is however trailing in opinion polls ahead of the May election, more than 50 points adrift of frontrunner Ferdinand Marcos Jr.

Duterte’s presidency has been defined by his war on drugs, during which thousands of alleged dealers have been killed.

Pacquiao, 43, has sought to set himself apart from Duterte, saying he will “continue the war on illegal drugs in the right way”, with suspects given a fair trial and rehabilitated.

“When I said the right way, we will not kill them in the streets,” he said on Monday.

“They will be given the right to defend themselves in court.” 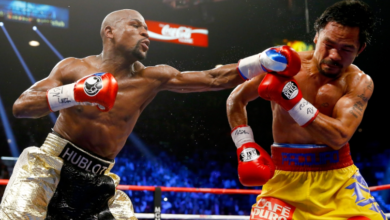 Floyd Mayweather has six of the 10 biggest gates in Las Vegas boxing history thanks to fights against Manny Pacquaio, Conor McGregor and Canelo Alvarez 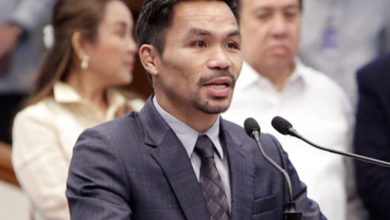