Two completely opposite sides of the wrestling spectrum debuted at the 1990 Survivor Series. One hatched out of a humongous egg. The other was an undead zombie from behind the grave powered by a mysterious urn. A wrestling chicken was easily denounced as wrestle-crap. Meanwhile, The Undertaker and all of his iterations is easily the greatest character in WWE history.

It’s not just because of what Mark Callaway put into the character, which was his all of course. But also because of how those around him sold for The Deadman. Referees ran in terror, superstars were shocked as well; searching for an answer as to how to defeat The Phenom. Over the course of his career, The Undertaker was able to pull off some wild moments.

During the Attitude Era, when you’re waging war against Stone Cold Steve Austin, you had better bring hell with you. Especially since Austin was good at raising it. That made The Undertaker the perfect foil for The Rattlesnake, especially since The Phenom was plunging farther into the depths of the dark side. On the way to their Buried Alive match at Rock Bottom 1998, The Deadman and Paul Bearer actually tried to embalm Austin alive to try to stop the match before it starts.

9 Put His Opponents In Body Bags

When your manager is Paul Bearer who in real life was a funeral director, then you have access to all the tools of a real-life mortician. Including body bags. For the first few months of The Phenom’s career, after delivering The Tombstone for the victory, The Undertaker would stuff a fallen journeyman’s body into a body bag and cart him off to the back.

It even led to a few body bag matches with the likes of The Ultimate Warrior; which ‘Taker was unsuccessful in. It’s easy to see why he abandoned the match since he lost all of them.

Normally, The Undertaker wouldn’t be caught dead (!) in random tournaments that don’t mean much in the grand scheme of WWE. But in 2020, AJ Styles thought it would be a good idea to talk trash about The Phenom. In Saudi Arabia, as AJ Styles was about to win the prestige Tuwaiq Mountain tournament, The Deadman made an appearance to not only spoil The Phenomenal One’s victory but claim the trophy for himself.

Over the years, The Undertaker has showcased a variety of powers. Nearly everything from being impervious to pain and even being able to summon lightning. Perhaps human possession was a bridge too far. While he was gearing up to face The Deadman inside Hell In A Cell, Randy Orton was set to be interviewed by Josh Matthews. However, Matthews was actually possessed by The Phenom during this interview. The Undertaker was able to scare the daylights out of both Randy and his father Cowboy Bob using the diminutive Matthews as his vessel.

For years, The Undertaker was always a WWE stalwart. No matter who left, no matter how much money was offered to him, The Deadman never wavered in his loyalty to the Chairman and his company. He finally found a unique way on air to show it. In Oklahoma City, McMahon decided he was going to humiliate JR in his hometown by forcing him to join the Kiss My Ass Club. It seemed like Taker was going to make the save when he headed to the ring and even pointed out how ridiculous the whole ordeal was – until he asked JR if he thought he was better than The Deadman. Big Evil then proceeded to help Kurt Angle and Vince McMahon obliterate JR in OKC.

Where Triple H succeeded both in real life and storyline in marrying the boss’ daughter to gain power within the WWE, The Undertaker failed in his own maniacal quest. While most fans remember the kidnapping (“Where to Stephanie?!”), the aftermath was far more insidious.

The Undertaker and the entire Ministry Of Darkness brought Stephanie to the ring strapped to the Deadman’s symbol. With the mortician Paul Bearer serving as a sinister minister (not The), the Lord Of Darkness attempted to force marriage on the then innocent Stephanie. Thankfully, Stone Cold Steve Austin wasn’t having any of it and saved the day, despite being mortal enemies with her dad.

While everyone remembers where they were when The Streak ended, the build to Brock Lesnar challenging The Deadman at WrestleMania 30 had a fairly lackluster build. But that was only because, at the time, it was all but academic that The Undertaker was going to once again prevail. Especially after the contract signing where The Phenom stabbed Lesnar in the hand before chokeslamming The Beast through a table.

Stabbing Lesnar wasn’t the first time The Undertaker put his unique stamp on a contract signing. At the 1999 Fully Loaded PPV, The Phenom collided with Stone Cold Steve Austin in a First Blood match. The match had the added stipulations that if Taker won, Austin would never wrestle again and if Stone Cold prevailed, Vince McMahon would never appear on WWE TV again. Once the terms were accepted, Undertaker blindsided the WWE Champion and busted him open. Vince handed The Deadman a fountain pen to fill up with Austin’s blood before signing the contract in The Rattlesnake’s own blood.

When you have an undead wrestler from the beyond the grave, you can do all sorts of crazy mystical things with The Undertaker. After 900 heels ganged up on the Deadman to help Yokozuna beat him at the Royal Rumble, he ascended to the heavens. It would be months before anyone would see him.

But Ted DiBiase of all people would be the guy to bring The Phenom back from the dead. Or so the fans thought. Eventually Paul Bearer would return to declare the DiBiase’s was a fake, setting up for two Undertakers to collide at SummerSlam.

As The Undertaker sought to gain full control of the WWE, Mr. McMahon’s appointed bodyguard, The Big Boss Man stepped into try to stop The Phenom and his Ministry Of Darkness. It led up to the first-ever Hell In A Cell match at WrestleMania between the two. It wasn’t enough for The Undertaker to prevail, he had to make a statement. The Brood entered the arena from the rafters, broke into the Cell and delivered a noose in order to hang and publicly “murder” the Boss Man on the grandest stage of them all. 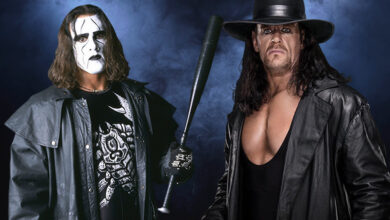 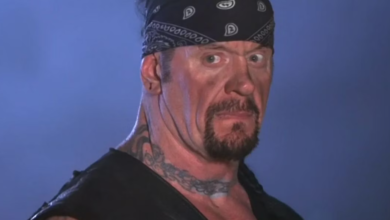 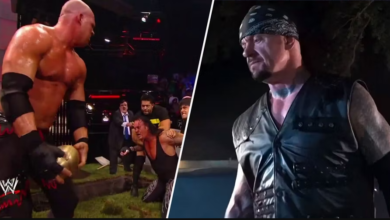