The legend of Muhammad Ali is written firmly in history, with the boxer transcending his sport to become one of the biggest icons of the twentieth century.

Although he was an Olympic Gold medallist, a three-time world heavyweight champion and perhaps the first true master of the mind games, it was his cultural impact which inspired masses.

A devout Muslim, the artist formerly known as Cassius Clay changed his name completely to honour his newfound religion, such was his dedication.

Ali further cemented his legend status with his stance on the Vietnam War, appealing to a far wider reaching crowd as the United States flailed in the Far East.

It was his retirement from boxing and resilience in the face of Parkinson’s disease which endeared ‘The Greatest’ to millions and assured he would be remembered for generations as he spoke passionately about his religion and refused to let his illness define him.

Ali’s friend and adviser Larry Kolb accompanied him on a goodwill trip to Pakistan in the latter months of 1987 and observed how one of the most dangerous men in the world was even so entranced by Ali at a speech.

Jonathan Eig writes in ‘Ali: A Life’: “On the video, during Ali’s speech in Peshawar, seated in a sea of men wearing traditional Afghani and Pakistani clothing, a thin man with a long beard stands out.

“He’s wearing an Arab throbe with a white ghutra on his head. He sits two rows from the back of the auditorium, listening to Ali speak.

“It appears to be Osama bin Laden, who lived in Peshawar at the time of the speech. After bin Laden became the prime suspect in the September, 2001, terrorist attacks on the United States, Kolb said he provided the videotape to experts in the U.S Intelligence community and that they told him the man was most likely bin Laden.”

Likewise, three years later the US President George Bush Sr implored Ali to undertake a dangerous political mission, which only the great man could perform.

Eig added: “November 1990, Ali travelled to Iraq to meet its president, Saddam Hussein, in an attempt to win the release of hundreds of American hostages.

“Ali was mostly silent during the meeting, but when it was over, Hussein released fifteen Americans and allowed them to travel home with the boxer.”

Future generations were naturally in awe of Ali for his fighting career, his worldwide popularity and his trailblazing attitude throughout his career after boxing.

When Dana White compared UFC superstar Conor McGregor to Ali in 2018, even suggesting he had surpassed the ‘Louisville Lip’, McGregor instantly shut down that evaluation.

“So, [what] he is saying about Muhammad Ali in the mental warfare, I respect, and I appreciate that.

“But, Muhammad Ali is a special, special individual I do not… I am not even close to that man’s greatness. The things that he has done throughout his career.

“He is a special individual, and to be even… even [to] have my name next to that man is truly a truly proud moment for me, so thank you all, but I cannot compare myself to that great man.”

OFFER OF THE DAY

Sky Bet: Bet anything and get £30 in free bets* CLAIM HERE

And no-one has ever spoken more highly of Ali than former two-time heavyweight world champion Mike Tyson, who revered the boxer from his formative years.

When Ali died in 2016, Tyson was moved to tears in multiple interviews and still struggles to talk about his idol to this day.

“When you have someone like Muhammad Ali in your family, sometimes, this is really crazy”, he said in an interview.

“Sometimes when God is making individuals, he is showing off.”

At this point, ‘Iron Mike’ begins to soften his voice as his eyes water, clearly perturbed by what he is saying.

“Just an amazing fighter, amazing human being. Just remarkable. And when you see him, every time, he looks more like a model than a fighter.

“He was just, I can’t articulate it, amazing.” 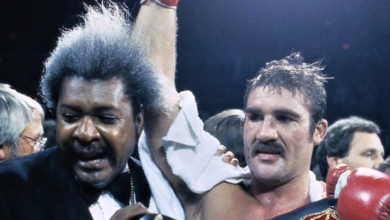 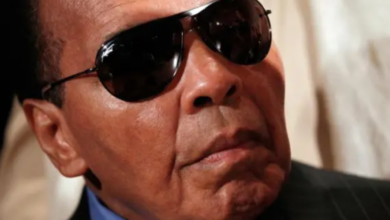 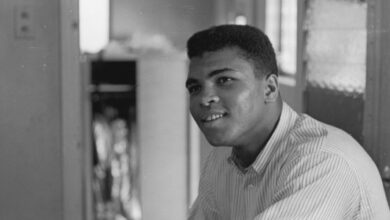