MANILA, Philippines — Presidential candidate Sen. Manny Pacquiao slammed “the massive disinformation” campaign on social media that has been spreading reports that he was dropping out of the presidential race to cut his losses, saying he remains confident in his bid.

“I want to issue a statement here about the reported plan for me to back out. It’s not true. My fight continues,” Pacquiao said in a press briefing in Cavite on Saturday.

The presidential candidate’s team said reports that Pacquiao is dropping out from the presidential race have been disseminated in social media by “pseudo-news” agencies while thousands of suspected trolls made them viral.

They said the false reports spread last week were the third attempt to discredit Pacquiao’s presidential candidacy since the election campaign started on Feb. 8.

“Whoever is spreading these reports that I’m backing out, maybe it’s you who want to back out. Not me,” Pacquiao said.

He added that the attempts to attack him with back-out rumors are symptoms of fear, saying those behind these campaigns see him as a threat. MANNY PACQUIAO, AMIR KHAN AMONG THOSE PRAISED BY WBC FOR HUMANITY WORK 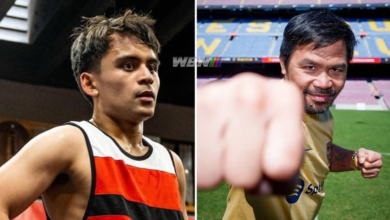