The Undertaker pivoting to the biker gimmick in 2000 was one of the biggest shocks for wrestling fans of the Attitude Era. WWE had protected the Deadman gimmick for many years, so it was a drastic change to show more of his natural personality. Undertaker utilized the American Badass persona for a couple of years finding success with it.

WWE eventually made him go back to the Deadman character since it was the bigger draw, but the biker added a fun side character. Fans wanted to see Undertaker bring the biker back for years without a path back. There were elements of it in his final cinematic match vs AJ Styles, but that was the only glimpse since 2004. Fans have forgotten the following tidbits about Undertaker during the biker stage of his career.

10 Worked Shoot Promos Wrote Him Off Before Return As Character

The Undertaker needed time off towards the end of 1999 when dealing with a groin injury. WWE was losing momentum with the Ministry of Darkness character when the faction reached an end. Undertaker started having more promos seemingly breaking character with snarky comments about management.

Vince McMahon threatening to remove Undertaker from a multi-man title match led to him walking out. Another injury issue saw Undertaker missing the start of 2000, which opened the door for him to experiment with the biker character for his return. Fans were interested to see what came next for him after a controversial departure from weekly television.

WWE used two popular mainstream artists for the entrance theme song for his biker gimmick. Kid Rock’s American Badass song fit perfectly since it was the same moniker used for Undertaker on commentary and in promos.

However, a bigger change came when WWE replaced it with Rollin’ from Limp Bizkit due to their close relationship with the band. Most fans remember the Limp Bizkit tune or the last version of the Big Evil song meant for his heel character.

8 Kane Turning On Him Again

The Undertaker and Kane teamed in the early stages of Undertaker’s biker character in the summer of 2000. However, it just set up Kane betraying his brother again for another heel turn. SummerSlam 2000 featured their first big match in over a year.

The match ended in a no contest when Undertaker ripped off Kane’s mask and sent him running. It was done to sell the intensity of Undertaker’s new character after making such a big change. Kane and Undertaker reunited in early 2001 when Kane turned face.

The most overlooked feud of the Invasion era came when The Undertaker and Kane were teaming up as the Brothers of Destruction. WCW and ECW’s tag teams often got decimated by two of WWE’s biggest stars in the tag division.

The Kronik tag team of Bryan Clark and Brian Adams found success in the final years of WCW. Undertaker actually was the one to vouch for them, but the big tag match was a disaster. WWE stopped booking Kronik on television shortly after the horrible performance against Kane and Undertaker.

The time as SmackDown General Manager made Stephanie McMahon a valued face for the first time as a WWE character. Vince McMahon wanted to punish Stephanie for going against him, which led to issues with Sable and A-Train.

Stephanie getting attacked by A-Train on multiple occasions eventually led to The Undertaker being the one to make a save. A-Train had injured him in the past, and it was done both for revenge and as the right thing. This eventually led to Undertaker’s final feud with the biker gimmick against Vince for getting in his way.

There was a time when The Undertaker adopted a heel character unlike any other time in his career. Undertaker turned heel with the biker gimmick by forcing Jim Ross to join Vince McMahon’s KMA Club as a way to associate with the boss.

McMahon attempted to help Undertaker in the booking and make him the latest heel wrestler to become part of his inner circle. Undertaker became a hated character for half a year thanks to everyone hating Vince and now giving him that residual heat.

Maven eliminating The Undertaker from the Royal Rumble match in 2002 is remembered decades later, but few fans remember their follow-up match. WWE continued the story of Undertaker attempting to torment Maven for eliminating him in a shocking moment.

The feud actually continued with Maven scoring a pin fall victory over Undertaker in a match for the Hardcore Championship. Undertaker’s bigger feud with The Rock saw Rock costing him the match to lose to an underdog rookie.

3 Tag Title Win With The Rock

WWE used to like having a shocking title change on television in the Attitude Era to keep fans guessing that anyone could happen. The Undertaker and The Rock were a makeshift team for a few weeks with the peak coming with a title win over Edge and Christian.

Both Rock and Undertaker had their fourth respective stints as WWE Tag Team Champions together after the previous three each came with other partners. WWE had them lose the belts back to Edge and Christian later that week on SmackDown.

2 Face Turn In Feud Vs Un-Americans

The heel run of The Undertaker in 2002 came to an end, but WWE needed to find an ideal way to get the audience to cheer for him again. Test, Lance Storm, Christian and William Regal were gaining huge heat for the Un-Americans faction insulting the American audience every week.

Undertaker standing up against them made it relatively easy for the fans to no longer hate him. SummerSlam 2002 featured Undertaker defeating Test in one of the upper card matches and waving the American flag after to continue the rest of his face run.

1 Getting Tricked By Kurt Angle’s Twin

WWE placed The Undertaker in a singles feud with Kurt Angle as the first major program for Angle after winning the WWE Championship. Undertaker was the stronger character on television, so WWE had to find a creative way for Angle to retain.

Kurt’s brother Eric Angle was in the ring when Undertaker hit him with a Last Ride finisher to seemingly have the win. The referee refusing to count confused everyone until the real Kurt snuck back into the ring to steal the win. This was one of the most creative heel booking finishes for WWE at the time to protect Undertaker in a loss. 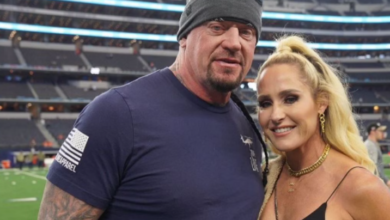 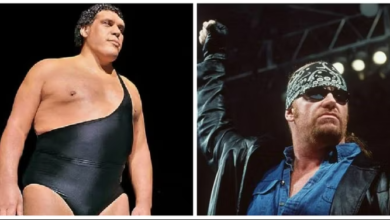 Andre The Giant Wanted To Wrestle The Undertaker In WWE 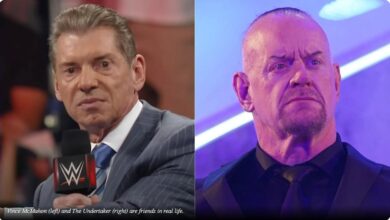 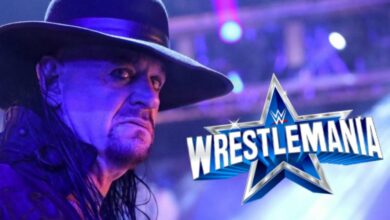