WrestleMania is WWE’s biggest event of the year. It is a show that pits the greatest names in wrestling against one another.

Fans from around the globe travel every year to attend what is now a two-night event.

Celebrities and sportsmen are often brought in by WWE to help drive revenue and interest.

Boxers have been at the fore of this down the years. At this weekend’s show, YouTuber-turned-boxer Logan Paul has a match on the card.

Ahead of his big night, we at Planet Sport have picked out six boxers who have already crossed over to make an impact in WWE…

Given his aura and outward personality, ‘The Gypsy King’ always felt like a shoo-in to eventually move into WWE.

His first appearance came in October 2019 as WWE SmackDown debuted on FOX. He could not keep out of the action for long.

Fury was involved in an altercation ringside with WWE superstar Brawn Strowman. The latter was a strongman once upon a time and at 6ft 6ins, he weighed around 385lbs.

The two athletes had a brawl on the following week’s episode of RAW before it was announced that they would wrestle at WWE’s Crown Jewel PPV in Saudi Arabia.

This was WWE’s fourth event in Saudi and those in action were paid handily for their work in the controversial country. It is believed that Fury earned just short of £12m for his match against the ‘Monster Among Men’.

Fury loves a grand entrance and it was no different here. He lapped up the adulation of the crowd as fireworks erupted behind him.

The self-proclaimed ‘lineal world champion of the world’ got the better of Strowman as well.

As the huge wrestler looked to re-enter the ring, he was floored by Fury via a right hand. Strowman could not come back into the ring before the referee counted to ten so the Brit was ruled the winner.

Before his second fight against Deontay Wilder, Fury made another appearance in WWE as an episode of SmackDown resonated from the Manchester Arena.

This time he joined forces with Strowman to dismantle a tag-team aptly named ‘The B Team’ (Bo Dallas and Curtis Axel).

After his win over Lou Savarese, Holyfield made his WWE debut at Madison Square Garden in front of just short of 17,000 fans.

The multiple-time world heavyweight champion was placed in a boxing match with one-half of the Hardy Boyz – Matt Hardy.

Hardy was feuding with Montel Vontavious Porter (MVP) at the time. With MVP being the heel, he recruited Holyfield to replace him in the match. This clash resembled a real boxing match as Michael Buffer was in the ring as the announcer.

As to be anticipated, Hardy had no answer for Holyfield’s offence. The wrestler was floored twice in the opening two-minute round.

Hardy was out on his feet at the start of the second so Holyfield opted against laying in any more punches.

Foolishly, MVP then entered the ring to vent his frustrations at ‘The Real Deal’.

This altercation ended as expected as MVP was ‘knocked out’ by Holyfield for going too far with his instructions. The bout was, therefore, declared a no-contest and the boxer embraced Hardy after the fact.

A couple of months later, Holyfield returned to the boxing ring as he unsuccessfully fought Sultan Ibragimov for the WBO world heavyweight title.

‘Iron Mike’ – out of any other boxer – has the most storied history with WWE.

The wrestling company capitalised on the attention Tyson got for biting Holyfield’s ear off in 1998. They paid him around £2.6m to make appearances in the lead-up and at WrestleMania XIV.

Tyson acted as a special enforcer for the WWE championship match between Shawn Michaels and “Stone Cold” Steve Austin.

The polarising boxer was involved in an unforgettable brawl with Austin just before WrestleMania. He subsequently aligned himself with Michaels’ group – D-Generation X.

Tyson turned his back on Michaels at the event itself though, as he counted the pin for Austin to become WWE champion for the first time.

An irate Michaels confronted Tyson after his loss. This did not go well for the wrestler, as Iron Mike dropped him in the middle of the ring. 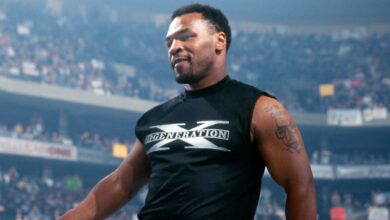 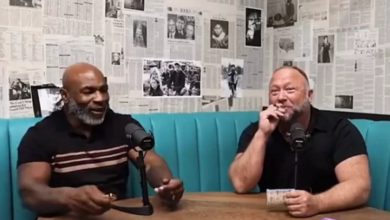 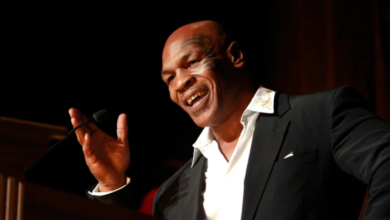