Mark Calaway will forever be remembered as The Undertaker, a semi-invulnerable undead monster dressed up in all black and possessing control over the supernatural world. Undertaker debuted in 1990 and his presence was a stark contrast in comparison to how characters were usually portrayed, often cartoonish and a tad silly. Seeing a 7-foot undead monster brawling amongst normal wrestlers was a sight to behold.

Despite portraying the same characters for decades, the novelty never wore off. The character went through a few alterations during the Attitude Era and Calaway did bring out a more human side from time to time but from WrestleMania 20 in 2004 onwards, the Deadman was a near-constant presence in the subconscious of the WWE Universe, so much so that fans of today think that Mark Calaway was born as the Undertaker.

Mark Calaway Had A Rough Stretch Early On

Some all-time greats were born into success in the business, with minimal struggle and a meteoric rise to the top. Superstars such as The Rock and John Cena were handpicked, but then there are wrestlers such as Steve Austin, someone who had to work himself to the bone to reach the pinnacle of the industry. Surprisingly, Mark Calaway himself had to go through quite a lot before he finally got the character down. Undertaker was not always Undertaker.

Calaway started wrestling at the age of 19 years old and while he had the look, 7 feet and imposing, his character left a lot to be desired. In fact, Calaway had no character, and he was just another tough guy, much like everyone else in the olden days.

Initially, Calaway wrestled under the moniker of Texas Red, and he wore a red mask during his matches. Texas Red did not last long and Undertaker shifted his character, disposing of the red mask and becoming the Master of Pain. In kayfabe land, Calaway had killed two men in a bar fight and after serving prison time, he got into wrestling to satiate his desire to hurt people. Somewhat of a compelling backstory but sadly, the Master of Pain withered away in a short amount of time.

In 1989, Calaway was brought to the WCW roster, and he adopted the name, Mean Mark Callous. Portrayed as a quiet but sinister villain, Mean Mark Calaway harbored a particular fondness for snakes and Ozzy Osbourne music. It was weird, but there were a few glimpses of the Undertaker here and there as he was quiet and dressed in black.

Sid Vicious was out due to an injury and a spot was vacant in the Skyscrapers team of WCW. Calaway was the substitute for Vicious, and he was given a mouthpiece in Teddy Long, as was common for that era. Calaway lacked the ability to cut a fiery promo but for a 7-foot-tall athlete, he was quick on his feet and quite agile. Alongside his teammate, Dan Spivey, Calaway put a beating on the Road Warriors at Clash of Champions X.

The legendary tag team was rather impressed by the newcomer but unfortunately, the promising tag team of Spivey and Calaway was broken up as Spivey left the promotion due to money disputes. WCW bookers scrambled for a replacement and brought in another masked dude to portray Spivey. The Skyscrapers lost a Chicago Street Fight to the Road Warriors at WrestleWar and Calaway ventured into the singles’ division soon after.

With Teddy Long gone, Paul E. Dangerously managed Calaway and while his love for snakes was somewhat eerie, the character just did not capture the imagination of the folks watching him. Despite that, due to his impressive agility and athleticism, Calaway did wrestle a few high-profiles during his brief stint in WCW.

Calaway wrestled Lex Luger for the NWA United States Championship at the Great American Bash in 1990 but came short in a losing effort. However, his contest against Luger was pivotal for his career as McMahon, owner of WWE, had sent out scouts to watch him perform. While he wrestled for WCW, Calaway was aware that his ceiling in the Atlanta-based promotion was not too high as bookers had told him that nobody was going to pay money to watch him wrestle.

Vince McMahon was not too impressed by what he saw, as Calaway was just another big guy in his eyes. But the people around him, Paul Heyman and Jim Ross, were adamant that McMahon give Calaway a tryout. Upon being notified that McMahon was looking to meet him, Calaway presented his notice to WCW and packed his bags, ending the short stint of Mean Mark Callous.

Mean Mark wrestled his last WCW match on September 7, 1990, at WCW WorldWide, defeating Dave Johnson. Had Undertaker been complacent with his career, wrestling fans might have never witnessed the most enduring and awe-inspiring characters in sports entertainment. Once he was given a proper character, Mark Calaway took off to superstardom, and today, the Undertaker is regarded as an all-time great.

Imagine WCW firing not one but two megastars in Calaway and Steve Austin on the basis of these two not being marketable. WCW gonna WCW. Brothers Of Destruction Vs. Stone Cold & Triple H: The Forgotten Feud That Failed To Make Stone Cold A Heel 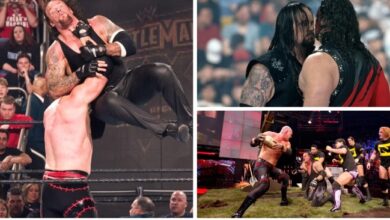