Yordenis Ugas promises to defeat Manny Pacquiao in a performance the Cuban says will be “a big gift to the fans” who tune in to view the battle.

Ugás steps up to replace Errol Spence Jr. in the main event, as Spence recovers from successful surgery on an eye injury.

The 35-year-old had been preparing to make his first title defense in the co-main event against Marcos Maidian’s brother, Fabian. He will now face the boxing legend Pacquiao in a career-defining fight.

At the same time, he is defending Pacquiao’s title. The belt “Pacman” won when he defeated Keith Thurman in his last fight.

Ugas was handed the belt unfathomably during the pandemic. Ready to prove his worth, Ugas vowed to upset the odds in Las Vegas.

“It’s an honor to fight the great multiple division world champion, Manny Pacquiao. I am more than ready to take on this challenge,’’ Ugas said.

“I have a tremendous amount of respect for Pacquiao. But I am coming to win this fight.

“I’ve been in camp working hard with my coach Ismael Salas, and I know together we will come up with a masterful game plan to combat anything Manny will bring to the ring.

“I wish Errol Spence Jr. a speedy recovery. I want to ensure the fans that I will be at my best for this fight.”

Outlining his hardships in making it to the top of the welterweight division, Ugas added: “Everyone knows my story about how I came to America to follow my dreams of becoming a world champion.

“Now it’s time to stamp my legacy with a victory, as one of the best Cuban fighters ever to put on a pair of gloves.

“I love my country. I want to dedicate this fight to all the men and women who are fighting for freedom.’

“This is going to be a great fight for all the fans. I’m planning on leaving everything in the ring. I can guarantee an amazing fight.

“We’re going to give a big gift to the fans on August 21. I’m leaving my heart out there for all my fans.”

Pacquiao begins a massive favorite to win in what could be his final ever fight on United States soil. 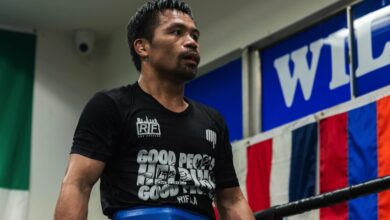 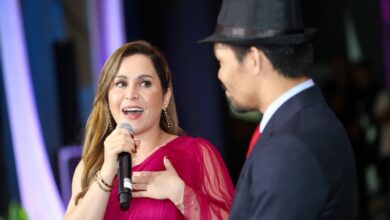