There was a lot to digest across WrestleMania weekend. Matches and moments we will be talking about for years to come. One of the best moments of the entire weekend didn’t actually involve any wrestling, nor was it at WrestleMania. It was The Undertaker‘s Hall Of Fame speech. An emotional ride during which The Deadman seemed as if he was unloading three decades worth of stories and thank yous. Probably a pretty accurate description as he has spent the majority of the last 30 years unable to break character.

Even though The Phenom sent social media into a tailspin by closing his speech with “never say never”, odds are we will never see The Undertaker wrestle again. That means his final outing will be Wrestlemania 36’s Boneyard Match. A fitting end to his career, and a worthy final opponent in AJ Styles.

Even though Styles is over the moon that he was the one who got to wrestle The Undertaker’s last match, he did admit over WrestleMania weekend that he tried to get The Deadman to come back for one more. “I called, and he didn’t return my calls, because he knew ‘hey, he’s going to convince me to have another match’,” Styles told Wrestling Inc’s Nick Hausman.

A Hat Tip At Money In The Bank

Styles didn’t reveal when exactly he was trying to get in touch with Taker, but he did explain that the weird hat tip to The Deadman at Money In The Bank wasn’t necessarily an attempt to coax him back. “We had the Money in the Bank match at the WWE Headquarters. So, we were just trying to pull things out of a hat.” That year’s MITB matches both took place at the same time inside WWE HQ, with the contracts hung above a ring up on the roof.

The calls have presumably stopped at this point, especially since Styles is now embroiled in a rivalry with a completely different legend. The Phenomenal One lost to Edge at WrestleMania, but the circumstances under which that match ended and what happened on Raw this week suggest their rivalry is far from over. 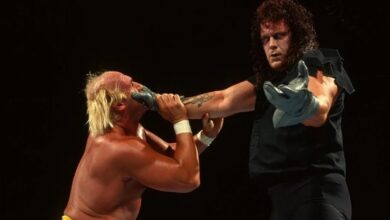 “I Just Crushed Hulk Hogan”: The Undertaker Once Opened Up on Hulk Hogan’s Accusations on Air 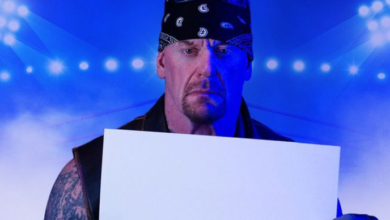 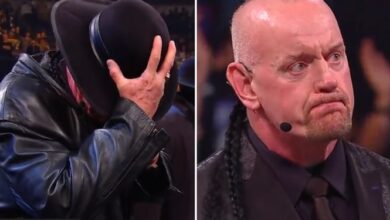