UFC boss Dana White has suggested that Conor McGregor could fight Manny Pacquiao in their much-discussed professional boxing match in 2022.

Conor McGregor’s last fight was a first-round TKO win over Donald ‘Cowboy’ Cerrone in a welterweight MMA bout in January 2020. Meanwhile, Manny Pacquiao’s previous fight was a split decision win over Keith Thurman in July 2019 in their professional boxing match. Pacquiao captured the WBA (super) welterweight title with this win.

“The way that this kid (McGregor) is right now – mentally, physically, emotionally – I mean this kid is on and ready to fight. I would love to see him focus on what he can do here at the UFC. Whether it is take another shot at that (UFC lightweight) title against Khabib (Nurmagomedov), or fight for the title against somebody else if Khabib retires; and defend that title.”

“You know, a boxing match with any of these guys, that kind of stuff is always going to be there. You are the absolute best in the world right now in MMA. And the timing is right now; not getting any younger. I’d love to see him go for it here over the next year. If he wants to fight you know one of these boxing guys, do that next year. That fight’s always going to be there.”

Dana White reiterated that such crossover fights would always be there for Conor McGregor, and that he needs to focus on the UFC this year.

Speaking of MMA-boxing crossovers, Dana White pointed out that Conor McGregor’s ‘money fight’ against Floyd Mayweather Jr. in 2017 was a perfect storm. Many variables, including Conor McGregor’s big win over Eddie Alvarez and other factors at the time, meant McGregor fighting Mayweather in their boxing match made sense.

“That was the perfect storm. It all sort of came together perfectly with Floyd (Mayweather). And, you know it’s fun. It was a fun thing to do. But, you know, (it was) a sort of one and done for me. I told you guys a few weeks ago at the fights, there’s a lot of fights out there that can make money. You’ve got people running around, talking stuff all the time. It’s not really what I do. Poirier vs. McGregor, that’s what I do.” (*H/T Sportskeeda for the transcription) 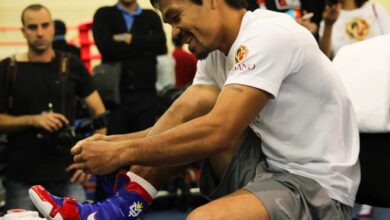