Roy Jones Jr. has outlined why he and former opponent Mike Tyson felt compelled to walk away from Triller after one solitary bout.

Even though their exhibition made over one million Pay Per View sales, “RJJ” and Tyson were never fully happy with the deal.

Jones revealed a small portion of what went down to Brian Custer on The Last Stand Podcast. He also discussed a possible full-time comeback to the professional ranks.

The former undisputed champion is considering a run in the cruiserweight division again. The only weight class he never won a bonafide world title in.

Custer also delves into his amazing boxing career and reflects on his big fights.

On the subject of Mike Tyson and Triller, Jones was candid about how it went down.

“We both had issues with them and still have issues with them,” stated Jones Jr. “Ryan Kavanaugh called me and personally told me he wanted to do something extra because of the fact the fight did so well.

“Did that ever happen? No, all a bunch of talk but nothing behind it.

On a possible return to action fully, Jones said a certain golf star winning in his fifties alerted his interest.

“Phil Mickelson has me really inspired me. What he did lit a fire back in me, and I got right back in the gym.

“I said, if Phil can be the oldest to win a major, then why can’t you go get that Cruiserweight title that has evaded you.”

Finally, talking about his capacity as a trainer with British star Chris Eubank Jr. on the books, Jones concluded:

“This kid is one of the most explosive fighters on the planet, now if we can calm some of that explosiveness down and teach him to do a little more boxing which he showed in his last fight, he can be really something to watch.

“I know he can fight with anybody. But, of course, we want GGG, but we’ll take Canelo too because it’s a great fight for us.” 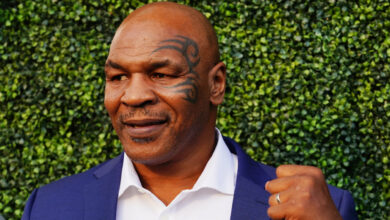 Mike Tyson Once Angrily Confronted Donald Trump And Asked ‘Are You F**king My Wife?’

Watch Mike Tyson slap UFC boss Dana White, kick him out of his seat on private jet and write ‘d***’ on his head in prank