This as the senator claimed that the mayor only scheduled their sorties in Cebu because he had also conducted his campaign there.

According to Pacquiao, Moreno held his team’s campaign in Cebu because the former actor was supposedly scared that the world boxing champion-turned-politician might prevail in the Visayas region.

(They are insecure because I am Bisaya and they’re thinking that MP can dominate the Visayas. That’s true.)

Pacquiao said he knows Visayans will end up voting for a fellow Visayan. He also noted he is the only candidate who hails from the Visayas, explaining that both his parents and family are from Cebu.

(Who will help each other but fellow Visayans. They say that there is a ‘Solid North’ but there’s also ‘Solid Visayas’ and Mindanaoans who are Visayans.)

Both Pacquiao and Moreno were spending one of their last campaign days in Cebu province. Pacquiao was set to hold a miting de avance in Cebu City on May 6, and another one in his hometown General Santos City on May 7.

Moreno, on the other hand, would hold his miting de avance in Tondo, Manila, on May 6.

In the April 16-21 Pulse Asia survey, which result was released on May 2, Pacquiao overtook Moreno on the third spot as the senator’s numbers rose to 7 percent while the mayor’s numbers dropped to 4 percent. 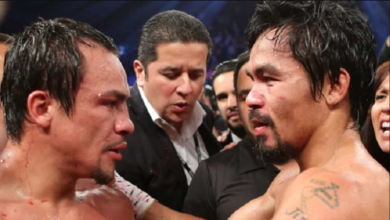