SENATOR Emmanuel “Manny” D. Pacquiao would have a fighting chance at next year’s elections if his corruption allegations against the administration of President Rodrigo R. Duterte are proven true, according to analysts.

Mr. Pacquiao, acting president of the ruling party, has recently criticized the President’s stance on the country’s sea dispute with China and last week said state corruption is rampant.

The professional boxer-senator is believed to be eyeing the presidency in the 2022 polls.

“If his allegations are proven true, these will weaken the chances of the admin bets. No one will vote for candidates endorsed by a corrupt administration,” campaign strategist Gerardo Eusebio said in a Viber message. “But it would also have to have meat and substance.”

Over the weekend, before leaving for a boxing match in the United States, Mr. Pacquiao held an online press conference where he presented piles of documents that supposedly contain proof of his allegations.

The documents will be turned over to the Senate Blue Ribbon Committee for a possible investigation, he said.

“Without details backed by documents or at least sworn statements executed by his witnesses, if any, there may not be sufficient basis for the Senate to conduct a hearing although the Blue Ribbon Committee is allowed to conduct investigation in aid of legislation even without referral,” Senator Panfilo M. Lacson said in a statement.

He said it is Mr. Pacquiao’s responsibility “to show some specifics in support of his allegations, which by its nature are serious, not to mention sensitive.”

The police and the Department of Social Welfare and Development, among the two agencies he named to be involved in anomalous contracts, issued separate statements on Sunday denying the accusations and welcomed any investigation.

“If Pacquiao will have the goods, the opposition will gravitate to him and increase his political capital. If these will hold water, expect a drop in the President’s rating, especially the C sector,” Mr. Eusebio said.

He cited “historical examples” in allegations against past Presidents Joseph E. Estrada, Gloria M. Arroyo, and the late Benigno S.C. Aquino, “which all resulted in lower trust ratings.”

“If Pacquiao will succeed in exposing corruption scandals and the administration would not be able to properly respond to his allegations, then it would really hurt the chances of the anointed successor of President Duterte,” he said.

Mr. Arguelles, however, noted that the senator does not appear to be ready to fully cut ties with Mr. Duterte.

“But the curious case here is that, if we look at what Sen. Pacquiao is doing and what he has been saying so far, I think he’s still not ready to really burn the bridge with President Duterte,” he said in a Facebook Messenger call.

“He is still saying that this is supportive of the President, that corruption may have something to do with the administration but he is not directly opposing the President.”

“We still see some hesitations on the part of Sen. Pacquiao whether he would blame the President for the corruption allegations,” Mr. Arguelles said, noting that it is “too early” to consider Mr. Pacquiao as the new face of the opposition.

Jean Encinas-Franco, a political science professor from the University of the Philippines, said administration bets would not be affected much for as long as the allegations are not directly attributed to Mr. Duterte.

“Manny (Pacquiao) is still ambivalent towards the President so the presscon yesterday will not affect the admin nor Duterte,” she said in a Viber message.

Mr. Duterte earlier said he would campaign against Mr. Pacquiao if the senator fails to identify corrupt government officials. 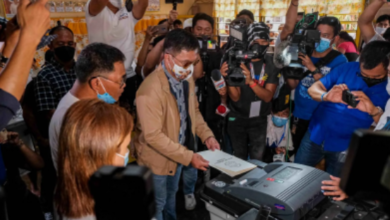 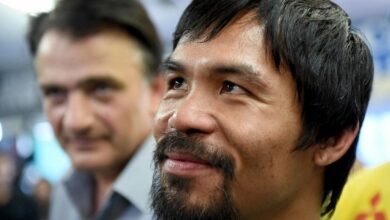