In a classic case of a prank gone too far, Michelle McCool feared the worst when three cops arrived at her home asking her the whereabouts of her husband, The Undertaker.

McCool recounted the story on a recent episode of “The Wives of Wrestling Podcast,” a new podcast hosted by the wives of Kurt Angle and Randy Orton, Giovanna and Kim, respectively.

“I had three cops follow me in the neighborhood one time because a 911 call said that I’d killed my husband with a sledgehammer,” McCool recalled. “Ironically enough, it was the WrestleMania after he wrestled Triple H.

“Yes, I was sitting there talking, and I’m like one of those people if I’m telling the truth, I feel guilty, like I feel like I’m lying if I’m in a pressure situation. I’m coming through the neighborhood, guarded gates, you know, and I’m talking to a girlfriend and I was like, ‘Dang, there’s a cop behind me but I wasn’t speeding.”

Though McCool didn’t specify the year, one can presume the incident occurred at some point between 2011 – 2012 when Undertaker and Triple H wrestled back-to-back WrestleMania classics.

“As we’re walking into the garage, you know, my heart’s pounding. I’m thinking the worst, obviously. So I go in the garage and I kid you not, he’s coming out of a shower in the furthest place in the house. I’m just yelling at him, ‘Babe, babe, babe!’ We finally get to the back of the house, he walks out in his towel, there’s three cops behind me and he’s like, ‘What is going on?’

“They finally told me. Somebody called 911, said I had killed him with a sledgehammer. They even let us listen to the call. I’m like, ‘People!’”

McCool revealed that several family members visited the Calaway residence just so they could debunk the rumors they heard.

“We had people show up to our house while we were having family dinner,” McCool said. “I was like, ‘Come on!’ We had to literally tell our family, ‘If something happens to any of us, we would let you know. Just don’t listen to anyone else.’”

With The Undertaker’s wrestling career behind him, McCool admitted it has been an adjustment for her to have her husband home all the time.

“It’s nice. I mean, he’s — y’all know, he’s retired like the last 15 years, I think,” McCool joked. “Long ago, Fit Finlay gave him the nickname Santa Claus because he would come out once a year. So it wasn’t like he was on the road … He wasn’t on the road, like, all the time. So I’ve been really fortunate with our kiddos that he’s been here to be dad, and it’s so fun to watch.”

“If he’s truly home for good, which I do believe this time he is, it’s nice. I mean, there’s times when I’m like, ‘Don’t you have somewhere to go?’ Ya’ll know [laughs]. A couple of days? But no, it’s nice having him here!” A Very Close Relative of The Undertaker Feels He’s “Overrated” 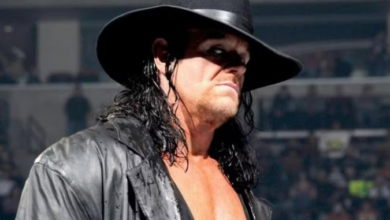 THE MAN BEHIND THE UNDERTAKER: MARK CALAWAY IN HIS OWN WORDS 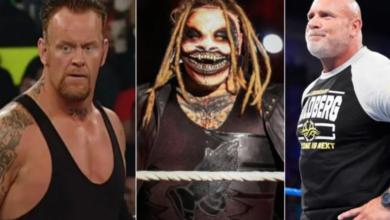 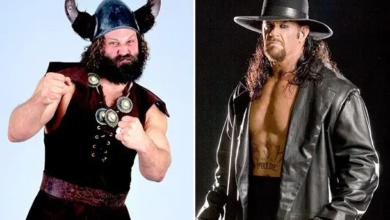