BOXING legend Mike Tyson went for dinner at a plush Italian restaurant – and left with a bright yellow vintage telephone.

Pasta, pizza and salads are usually on the menu at the swanky Cafe Amici in Beverly Hills.

But heavyweight icon Tyson, 55, appeared to opt for something a bit harder for him to sink his teeth into.

And no, not Evander Holyfield’s ear which the Baddest Man on the Planet described tasting like “a**”.

Instead he went for the classic phone, which was carefully wrapped in plastic.

The former WBA, WBC and IBF champion could be seen holding the item as he left the last Sopranos actor Paul Herman’s memorial dinner at Cafe Amici.

YouTuber-turned-boxer Jake Paul told SunSport in April that Tyson is his No1 choice to fight next.

And Tyson has since stated that he would be willing to face the Problem Child.

The New York native hasn’t fought inside the squared circle since drawing in his exhibition comeback bout against Roy Jones Jr in November 2020.

But he has fuelled speculation he could be set to return to boxing after sharing footage of him in training where he displayed his explosive power.

Podcaster and UFC commentator Joe Rogan recently revealed that Tyson is taking “Mexican supplements” ahead of a return.

Comparing Tyson and Floyd Mayweather, Rogan said: “The difference between Floyd and Mike Tyson is Floyd’s a 155lb.

“Even if he’s 55-years-old, he’s on all the Mexican supplements. He’s on everything.

“They use electrical muscular stimulation on him.”

There is no suggestion that Tyson has taken any illegal substances. “IRON” MIKE TYSON: “THE BADDEST MAN ON THE PLANET” UNTIL ONE FATEFUL NIGHT 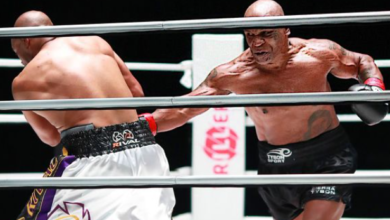