Manny Pacquiao ‘would love’ a rematch with Floyd Mayweather this year, the Filipino’s manager Sean Gibbons has revealed.

Pacquiao and Mayweather faced each other at the MGM Grand in Las Vegas in 2015 in what was dubbed beforehand as the ‘Fight of the Century’.

Mayweather, who went on to retire with a spotless 50-0 record, won that fight by unanimous decision and fans were frustrated in the years that followed that no rematch took place for Pacquiao to try and exact his revenge.

That could now change with the Filipino keen to get back in the ring with Mayweather – provided any contest is held with exhibition fight rules.

‘[I] would love to see it but Mayweather wants none of this smoke due to his ego. Senator Pacquiao would love an exhibition, if he was to return it would be this year – but that is a big “if”.’

Mayweather made the decision to retire from professional boxing in 2017, having beaten Conor McGregor in a lucrative crossover bout with the UFC star.

But rather than sit idly in retirement, Mayweather has continued to earn huge sums of money from lucrative exhibition fights.

His first exhibition came in 2018 with a brutal win against Japanese kickboxer Tenshin Nasukawa.

Mayweather destroyed the 20-year-old in a bout that saw him offered $9million by Japanese MMA promotion RIZIN.

An eight-round contest with YouTuber-turned-boxer Logan Paul followed last year and that went the distance, with Paul able to come into that fight 35 pounds heavier than Mayweather.

Mayweather was active only last month when he fought his former sparring partner Don Moore in the Middle East. After that display he confirmed another exhibition is heading to the region for later in the year.

‘I will bring another fight back to the UAE this year. It’s a secret. I don’t want to let the cat out the bag right now. But we have an opponent, and I choose the UAE.’

Pacquiao only retired last summer to focus on politics in the Philippines after a defeat to Yordenis Ugas.

The 43-year-old recently lost out in his bid to become president of the Philippines to Bongbong Marcos and is now said to be targeting his next move.

Pacquiao will be aware that no fight in the history of the sport sold more pay-per-view buys than his match-up with Mayweather in 2015, which saw 4.6million sales.

Both men made hundreds of millions of dollars for that fight and under exhibition rules the two fighters may find an offer too good to turn down. 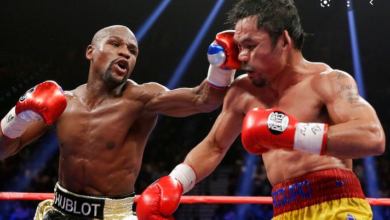 Floyd Mayweather defeat ‘nothing that Manny Pacquiao has to regret’ upon his retirement, says Roy Jones Jr 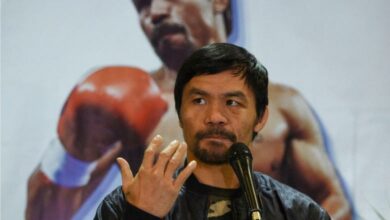 Boxing: What you should know about Manny Pacquiao, Asia’s rags to riches champion