NASCAR will have a WWE legend behind the pace car’s wheel on Sunday when The Undertaker leads the field to green. Yes, the famed Dead Man will be the Honorary Pace Car driver at the EchoPark Automotive Grand Prix. The action goes down at the Circuit of the Americas and can be seen on FOX. While you might think this is a bit weird, there are some connecting ties here. Firstly, The Undertaker is actually Houston, Texas-native Mark Calaway. Secondly, FOX has the WWE show “Friday Night SmackDown” on its airwaves.

NASCAR Hosts WWE Star The Undertaker Ahead of Sunday Race

“I am honored to be the Honorary Pace Car driver at the EchoPark Automotive Grand Prix in Austin,” Calaway said. “It’s a big week for Texas with WrestleMania in Dallas on April 2 and April 3, and I am excited to kick it off at Circuit of The Americas.”

The Undertaker spent decades running WWE opponents roughshod in rings all over the world. It would be hard-pressed to find another pro wrestler’s entrance, with the lights and gongs, that isn’t as well remembered.

As he mentioned, WrestleMania, WWE’s biggest pay-per-view card, will take place in Dallas. Calaway will not be seeing ring action as he’s now retired from the world of pro wrestling. In his WWE career as well as today, The Undertaker remains both an enduring figure and pop culture icon. He is a multi-time WWE and World Heavyweight Champion, a six-time tag-team champion, and a Royal Rumble winner. You might see Ronda Rousey in action at WrestleMania, though

The Undertaker Will Be Joining WWE Immortals In Hall of Fame

On top of all those honors, he’s going to be entering the world of high honors. Next week, The Undertaker joins the immortals in the WWE Hall of Fame. Early in his WWE career, when it was known as the WWF, The Undertaker would come to the ring and follow Paul E. Bearer who held an urn with great powers up in the air.

Calaway is no small man. Hardly. NASCAR will need to really make a lot of space beyond the steering wheel for him to fit in the pace car.

Upon leaving the world of active WWE and professional wrestling, we leave it to someone who knows him pretty dang well to sum stuff up. Pro wrestler Michelle McCool, who also is Calaway’s wife, said this upon his retirement: “With Mark doing this for 30-plus years at this point, having 15-plus surgeries, both of his hips replaced, I don’t think they truly understand what it takes for him to get prepared to go out and wrestle a match, and he does it all for the love of the business.” 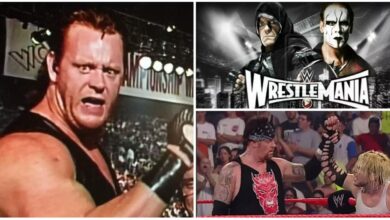 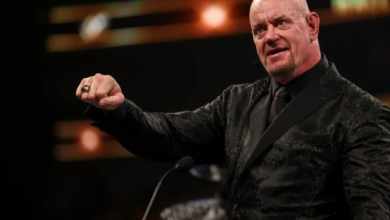 Conrad Thompson On Whether He Will Host Undertaker’s Podcast 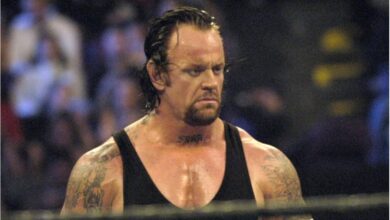 “I Wasn’t Acting”: The Undertaker’s Terrifying Incident That Shuts Up People Who Claim “WWE Is Fake” 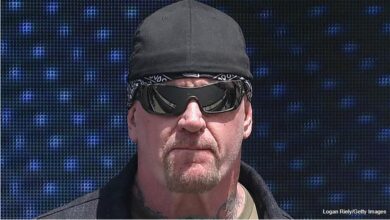