Whether it’s the current pound-for-pound list or the best of a generation, there is always an argument as to who is in top spot.

When it comes to the greatest of all-time, it becomes an even bigger debate and because of that, we’ve decided to do our own top 10.

Boxing’s first black heavyweight champion, his seven-year reign from 1908 to 1915 was characterised by a vivid lifestyle and a hearty disdain for those who preached white supremacy.

His wins sparked race riots across America and his legacy effectively shut out the hopes of other potential black heavyweight challengers for the next 20 years. His controversy clouds his immense punching power and ringcraft.

Arguably the best lightweight ever, Leonard reigned from 1917 to 1923. He fought 212 times and suffered only four knockout defeats.

Leonard went on to challenge Jack Britton for the world welterweight title in 1922 and was on his way to victory before striking his opponent after the bell and earning a disqualification.

Probably the best flyweight of all time; certainly the best fighter Britain has ever produced.

Nicknamed “The ghost with a hammer in his hands”, the Welshman’s pale and skinny physique belied the power of his punches.

Heavyweight champion Gene Tunney – a boxer who deserves an honourable mention in his own right – called Wilde “the greatest fighter I ever saw”.

Pep fought 242 times and emerged victorious in 230 of those bouts. His art was in a ring artistry which verged on the balletic, and he once famously won a round without throwing a single punch.

He was world featherweight champion from 1942 to 1950 and regained the title from his great rival Sandy Saddler in 1949. Nicknamed “Will o’ the Wisp”, Pep was one of the finest purveyors of his craft in the sport’s history.

“The Brown Bomber” ruled the heavyweight roost with dignity and dynamism for almost two decades.

He reigned as champion from 1937 to 1949, making 25 defences of his title. He was the first black heavyweight champion since Jack Johnson but was a hero for all Americans. Only one other heavyweight has since matched his grace and athleticism in the ring.

The only boxer on this list to fight in this century and whose brash, money-orientated nature made him one of the most polarising figures the sport has ever seen.

A defensive wizard whose blend of speed, athleticism and footwork proved unsolvable for every one of his foes, “Money” won all 26 of his world title fights across five different weight classes in compiling an immaculate 50-0 professional record.

“Homicide Hank” was a kamikaze whirl of flying limbs, a brutal puncher with a granite chin to match.

At one point in 1939 Armstrong held world titles at featherweight, lightweight and welterweight at the same time. He fought 151 times – many of his bouts just days apart – and stopped 101 of his victims.

The golden boy of the 1976 Olympic Games in Montreal, Leonard starred in boxing’s greatest modern era, his bouts with Roberto Duran, Marvin Hagler and Thomas Hearns the stuff of legend.

Leonard’s dazzling skills and glamorous persona were such that even a hefty mantle as “Sugar Ray” could have fitted snugly on his shoulders. Leonard won five world titles at five different weights.

The only man whose ringcraft held a candle to that of Ali; indeed there are many wise boxing sages who reckon his lightning speed, timing and movement was even better.

First world welterweight champion and five-time world middleweight champion, Robinson reigned in an era of stars, and his six-fight rivalry with Jake La Motta is one of the sport’s best.

The three-time world heavyweight champion who transcended sport to become one of the most famous faces on the planet.

He prevailed in the Rumble in the Jungle and Thrilla in Manilla, arguably two of boxing’s biggest fights in history.

Ali was able to “float like a butterfly, sting like a bee” against many of his contemporaries and proved, in his own words, why he remains ‘The Greatest’. 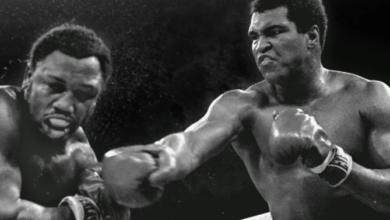 TODAY MUHAMMAD ALI WOULD HAVE TURNED 80, BOXING MUST NEVER FORGET HIM 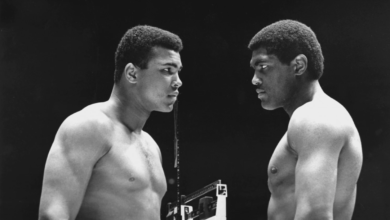 Muhammad Ali’s dark side emerges in ‘what’s my name” fight with Ernie Terrell on February 6, 1967 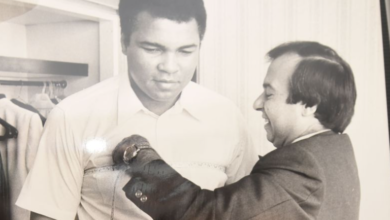 FLOYD MAYWEATHER SAYS HE’S THE BEST EVER, MUHAMMAD ALI NOT THE GOAT