The young star had launched a career in boxing against the initial will of his father, who reigned as boxing’s only ever eight-division world champion. He won his first three amateur bouts picking up convincing victories which all took place in front of large gathering crowds.

However Pacquiao Jr has now lost his undefeated record to professional debutant Chris Smith at San Fransisco’s Irish Center. He battled hard throughout the fight and was involved in some heavy exchanges, but was unable to get the decision when the contest made the final bell.

Smith raised both hands in the air when the decision was announced before celebrating wildly after inflicting a huge shock in front of a stunned crowd. There was a considerable attendance in the arena to see the boxing legend’s son make his latest bow which played a huge part on the context of the fight.

This will no doubt fuel further criticism online for the Filipino who is just making early footsteps in his own planned career beyond the ropes. Pacquiao Jr has already been forced to respond to criticism once before, claiming the extra scrutiny is unavoidable having raised his profile through social media.

“At first, I was just quietly going into it and stuff, but I guess it’s unavoidable. I’m trying my best. I have to get used to it,” Pacquiao Jr. told abs-cbn.com. “I’ve constantly been training. I’ve been training for months [in the US], and this is all I want: get more experience, get better. “I think we’ll see in the future whether I will turn professional. Right now, I’m just trying to get better, to get more amateur fights, bring my record so we’ll see in the future.”

Pacquiao Jr has been training with his father’s legendary trainer Freddie Roach at his gym in LA, and has also worked alongside undisputed 168lb champion Canelo Alvarez. His father was initially against his son setting foot in the ring but has since come out to congratulate him for his previous victories.

Pacquiao Jr also known as Jimuel has a huge social media following already in his career and even held talks with YouTube fighter Alex Wassabi over a potential bout on the Creator Clash event earlier this year. Pacquiao himself could appear in the ring soon having lost the presidential election back in the Phillipines.

The Filipino legend retired following defeat over Yordenis Ugas to focus on his own political aspirations. However he is now reportedly eyeing a comeback which could include a rematch with famous foe Floyd Mayweather. British star Amir Khan has also claimed that Pacquiao’s trainer Freddie Roach has reached out over a potential exhibition clash. 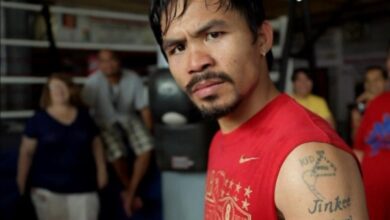 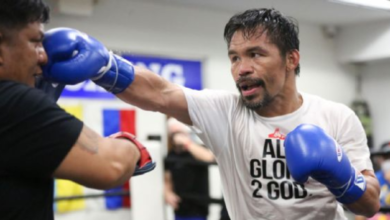 Manny Pacquiao ready for his toughest fight yet