The Undertaker returned for a WrestleMania match with AJ Styles, a cinematic match, but a match nonetheless, his first real match since WrestleMania 33. With his return, it’s getting people thinking of what the Undertaker could do next. He’s easily the greatest character in WWE history, but he can’t carry a match like he used to and isn’t the same performer in the ring that he was before his streak was broken. So in the limited time, he has left in the WWE, there are definitely some things we want to see the Undertaker do before he finally retires.

In the same breath, we hope the Undertaker avoids some feuds and situations, but it could tarnish a great career. There are feuds he doesn’t need to get involved with and elements of his character that don’t need to explore, so hopefully, Vince McMahon avoids these situations with the Undertaker in the years to come.

The Undertaker hasn’t held a championship since 2010 when Shawn Michaels’ interference at the Elimination Chamber match caused him to lose it. It’s been over 10 years since we have seen Undertaker on top so one more run with the WWE Championship or Universal championship is what we want to see.

Braun Strowman just won the Universal championship at WrestleMania and while we would love to see an Undertaker title run, doing so against Braun is something that needs to be avoided. The way Braun destroyed Goldberg at WrestleMania is not what we want to see happen to Undertaker and at his age, facing a younger, much stronger opponent is something he needs to avoid.

A feud with Aleister Black with the Undertaker could be something special, considering both are fairly dark characters and anti-hero characters. It could be a passing of a torch if Undertaker was to give back to Black, and it would be an interesting stare down between two wrestlers who are well known for their love of the demonic.

The Undertaker has been making the rounds wrestling legends in the WWE, such as Shawn Michaels, Triple H and Goldberg. Those matches have been anything but spectacular and have really shown how much the Undertaker has slowed down. He needs to face younger opponents who can carry the match for him and legends like Goldberg aren’t it.

John Cena tried everything to get a WrestleMania match with the Undertaker and at WrestleMania 34, they had a match on the spot when the Undertaker showed up. But it was horrible and a squash of Cena, which included many botches. A proper match between the two is something we want to see considering they have never actually faced each other at WrestleMania.

10 Needs To Avoid: Any Match In Saudi Arabia

Like many wrestlers, the Undertaker is getting some big pay-days to go to Saudi Arabia to wrestle. But the matches are always terrible and he shows up more for the entrance and presence of the Undertaker than his actual matches. He needs to stick to WrestleMania and big events at home and stay away from the money grab in Saudi.

At WrestleMania 24, Edge and the Undertaker competed in the main event and Undertaker walked out with the World Heavyweight championship. With Edge returning, he’s the one legend the Undertaker could have a great match with and bring back some old magic from their previous feuds before.

Brock Lesnar breaking the Undertaker’s streak at WrestleMania was the biggest victory in WWE history. Their feud over the following years was awesome as well. But that feud has been told and there isn’t to add to it and or any reason why Brock would want to fight the Undertaker again, so this needs to be avoided.

Samoa Joe is one of the best workers in WWE who would be a great opponent for the Undertaker because he could bring the best out of him, carry the match, and have a real stiff fight with him. Joe’s storyline with Brock Lesnar was great because Joe was a believable character who didn’t fear a bigger man.

6 Needs To Avoid: Losing At WrestleMania

The Undertaker has lost twice now at WrestleMania, first to Brock Lesnar and then to Roman Reigns in what many thought was his retirement match. But unless he is going to retire, he shouldn’t lose at WrestleMania again. As the losses start to pile up, it will cheapen all those years of the streak and make Undertaker look like a guy who hung on too long.

5 Want To See: Feud With The Fiend

Perhaps the perfect foil for the Fiend would be the Undertaker. Both have the ability to do some weird, mystical things, and both were the stars of their very own cinematic experience matches. It would be a dark and very weird storyline to see them battle each other and the fact Undertaker has a WrestleMania victory over Bray Wyatt would be the perfect setup for a future Fiend feud.

4 Needs To Avoid: The Supernatural Elements

In his WrestleMania match with AJ Styles, the Undertaker brought back the American Badass gimmick he used for a few years. The biker gimmick was a surprise to see at WrestleMania 36, but a welcomed one as it was a throwback to another time and adds something different than the same Undertaker we have had for years. He can switch back and forth as needed.

2 Needs To Avoid: Retiring Without A Final Match

Everyone believed the Undertaker was retiring when he laid his gloves and hat down after his WrestleMania loss to Roman Reigns. But then he came back for a WrestleMania appearance, then started wrestling in Saudi Arabia and WrestleMania again. You want to see him get a proper send-off and not just end his career because of an injury.

The cinematic experience match with AJ Styles took 8 hours to film over two days and was a different match for WrestleMania. But for a 55-year-old Undertaker, it’s the perfect type of match for him because it can be scripted and taped over a long period of time. It can keep him fresh and relevant without having him in the ring. 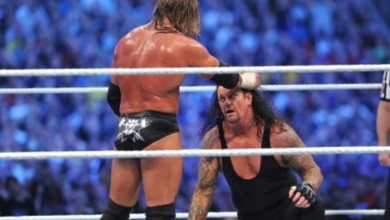