Try as we might, it’s just not possible to perfectly encapsulate the “True Grit” of Marion Robert Morrison. Better known as John Wayne or “The Duke,” the star captivated audiences worldwide during the Golden Age in Hollywood with his Western and war portrayals. Even after his passing in ’79, his fandom continued to grow. It still spans far and wide across all generations both domestically and internationally. That becomes very apparent on one day, in particular, every year: Halloween.

The John Wayne Estate planned ahead for that this year, taking to Instagram to ask fans a favor. They encouraged anyone trying to encapsulate his likeness to share their costume to the Estate page. The reward? A chance to be featured on their Instagram page to over 200k followers. And, boy, those fans delivered this Halloween.

Young and old, furry or otherwise, here’s the result:

The Instagram page for the John Wayne Estate also shared several other contenders’ costumes to their Story. One of these includes a horse named Rooster Cogburn fit with a solid eyepatch paying homage to the ’75 flick of the same namesake.

How Much Did the Entire ‘True Grit’ Outfit Go For At an Auction a Decade Ago?

If you want to dress up in authentic John Wayne garb, it might cost you a pretty penny. Apparently, Rooster Cogburn’s full get-up went for over $160k back in 2011. Sources authenticated it as the same costume worn by John Wayne in the original ’69 film and its subsequent sequel in ’75. The films came as an adaptation of Charles Portis’ novel of the same name.

Not only was the film revered by critics, but it also led to both an Oscar and Golden Globe award as well. The John Wayne Estate put up this Golden Globe as part of their mass auction including several pieces from his iconic wardrobe.

While some fans like to show their support for John Wayne’s legacy through their costumes, other fans opt to show off their dedication in a more permanent way. Ben Fisher is a tattoo artist that captured a timelapse of a John Wayne piece he did for one die-hard fan a couple of years ago.

Though the fan chose to stick to black ink, the detail of the piece is immaculate. It shows off John Wayne’s gritty stare as he rocks a cowboy hat and neckerchief. It also includes the year 1926 which IMDb credits as the start of John Wayne’s career in filmography.

The video shows all aspects of the tattooing process starting with the initial sketch and placement on the client’s right forearm. Does your dedication go that far?

Check it out here: 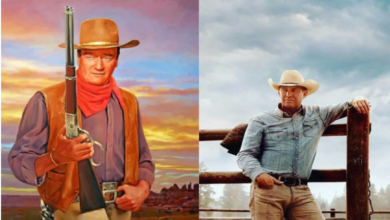 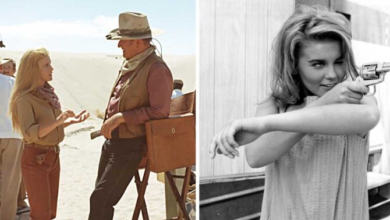 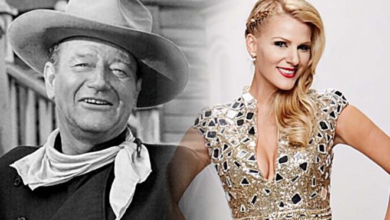