Muhammad Ali was such a legendary boxer he deemed himself “The Greatest.” No one really seemed to disagree.

Ali went by a lot of names during and after his career. He was “Hands of Stone,” “The Hitman,” “The People’s Champion,” “The Louisville Lip.” Above all, he was a master fighter.

The photo features Muhammad Ali going against Sonny Liston for a rematch.

The two first went head-to-head in Miami the year before. Ali was going by the name Cassius Clay at the time and was only 22.

According to Biography.com, that first fight alone was enough to draw people into the famous rivalry. Ali taunted Liston and promised the reporters present that he was going to shock the world. He performed a late attack on Liston, causing him to quit in the sixth round.

It was all more complicated than just a typical boxing match, however. Before that fight, Ali was speaking with members of the Nation of Islam. He had brought along the infamous political figure Malcolm X. Amongst all the controversy, the fight was nearly canceled.

However, the show must go on. And quite the show it was.

As far as names go, Ali had several changes to his persona. He eventually changed it to Cassius X. Then eventually he went by Muhammad Ali, the name that Elijah Muhammad, the head of the Nation of Islam, gave him.

At the same time, Liston had his own kind of controversy. He was associated with the mafia and there was a growing rumor he threw that first fight for financial reasons. A match-fixing investigation was underway, but nothing came of it.

A Rematch and the Punch of the Century

Finally, the two got the long awaited rematch.

Liston, who was known for loving beer and hot dogs, got into better shape this time. He was actually the anticipated winner. A small in-person audience gathered to watch. It was the smallest crowd in heavyweight championship fight history.

Ali went for the right hook right to the skull. The fight was less than one full round, just under the two-minute mark.

The famous photo shows Muhammad Ali as he taunts his opponent unconscious on the floor. It’s fiery, passionate, and jaw-dropping. Liston got up after 10 seconds but it was too late.

He told Liston, “Get up and fight, sucker!” but the fight had ended in an epic punch. In fact, it all happened so quickly, many in attendance missed the final blow entirely. Ali’s hands were so quick and deadly that if you blinked, you might miss the most exciting part of the night. The “phantom punch” was the name given to the mighty knockout punch.

Even the punch was controversial. For years people debated if it was just Liston throwing the match again. However, it’s clear the punch landed and it was enough power to turn Liston’s head. 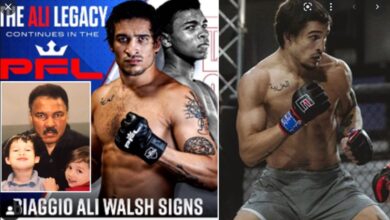 Muhammad Ali’s grandson Biaggio, 24, becomes the next family member to follow in the legend’s footsteps as he turns his back on football to sign a deal with ‘Professional Fighters League’: ‘I have a legacy to live up to’ 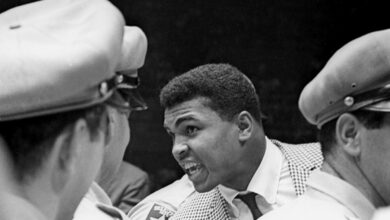 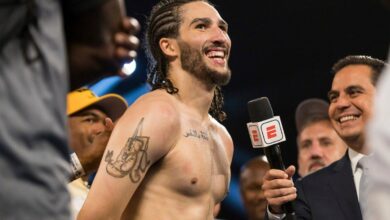 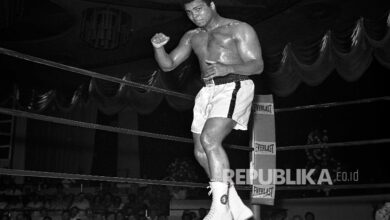