Tyson Fury’s promoter, Frank Warren, has said a heavyweight division unification bout with Oleksandr Usyk “will be made”. The Ukrainian Usyk defeated Anthony Joshua on points for a second time on Saturday, retaining his WBA, IBF and WBO titles, before saying of Fury: “I am convinced he wants to fight me. I want to fight him.”

Fury recently said he plans to stay in retirement but after of Usyk’s victory he posted a video saying: “I would annihilate both of them [Usyk and Joshua] on the same night … get your fucking chequebook out.”

Warren told BBC Radio 5 live on Monday: “He and Usyk would be a really good fight. It’s a fight that I think will be made because both teams would like to see that happen.

“Usyk said after the fight that it’s the only fight he’s interested in and it’s certainly the same case with Tyson. It’s just a matter of where it will generate the most income because it’s a unique fight, a historic fight.

“It’s the first time for God knows how long that the four belts are on the line. Both fighters are undefeated. The whole world of boxing will be captivated by this fight.”

Warren also left the door open for a potential all-British clash between Fury and Joshua. “If AJ manages to get a couple of wins under his belt, and I believe Tyson will beat Usyk, that may be a fight to be made,” he said. “But AJ’s got to re-establish himself before you can even think about fights like that.”

Meanwhile, Joshua said on Sunday night “I let myself down” with his post-fight behaviour in Jeddah. After the final bell, Joshua threw down two of Usyk‘s belts before storming out of the ring, only to return later and deliver an expletive-laden speech.

“I wish (Usyk) continued success in your quest for greatness. You are a class act champ,” Joshua wrote on Instagram. “Yesterday I had to mentally take myself into a dark place to compete for the championship belts! I had two fights, one with Usyk and one with my emotions and both got the better of me.

“I’ll be the first to admit, I let my self down. I acted out of pure passion and emotion and when not controlled it ain’t great. I love this sport so so much and I’ll be better from this point on.” 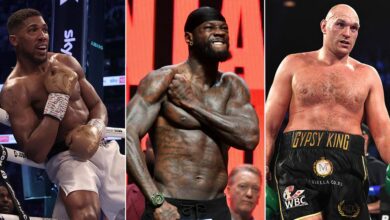