Usyk’s skills are undeniable. He’s been ranked boxing’s best pound-for-pound fighter by talkSPORT, DAZN, World Boxing News and a host of other outlets. However it’s his courage in seeking out the best opponents, in ducking no challenges, that makes him a worthier pound-for-pound king than many who came before.

Boxing is a strange sport in that the best fighters have to actually choose to take one another on. In football, you can’t win the Champions League without defeating Europe’s best teams. In men’s tennis, you’re unlikely to win Wimbledon without having to face Novak Djokovic or Rafa Nadal. You can’t win an F1 race without sharing a track with Lewis Hamilton and Max Verstappen. The list goes on and applies to almost every sport.

Unfortunately, with its numerous alphabet world titles and toothless governing bodies, boxing relies on its participants to willingly agree to take on the best. Hardly a foolproof system. Most elite boxers play the numbers game, weighing up each fight on its risk-reward ratio.

Not Usyk. The Ukrainian unified the cruiserweight division by going to the backyards of three opponents to win all four title belts (then defended them against Tony Bellew in the UK for good measure). He stepped up to heavyweight – for the challenge, not because he could no longer make the 200lb limit – and after two settling-in fights outboxed and outfought Joshua in London to become a two-weight world champ.

After defeating AJ again in Jeddah, the 35-year-old was free from all obligations. Tyson Fury’s latest ‘retirement’ meant Usyk was the Ring magazine champion, his division’s clear no.1 and was free to do whatever he wanted: retire, face a handpicked opponent, take on a mandatory challenger.

Usyk being Usyk, he immediately called out Fury – a fight where the smaller southpaw would start as a significant underdog. “I want to fight him and if I’m not fighting Tyson Fury, I’m not fighting at all,” he said.

We can take Usyk at his word, because he has actively sought out the hardest challenges against the best opponents throughout his nine-year pro career. Something which cannot be said of several of his pound-for-pound predecessors – or some his current rivals for the P4P top spot.

Floyd Mayweather’s ring resume may be a who’s-who of the world’s best boxers, but after he defeated Oscar De La Hoya in 2007 to become the sport’s biggest superstar, his attitude to matchmaking rapidly changed. Mayweather spent five years avoiding Manny Pacquiao – waiting until his great rival’s ludicrous speed and dynamism had faded – before finally giving fight fans the bout they all wanted.

Mayweather undoubtedly fought great fighters but was cunning about when he did it, taking on smaller men (Juan Manuel Marquez), faded fighters (Shane Mosley) and the frankly unworthy (Victor Ortiz) as he kept Pacquiao and boxing fans waiting in limbo.

It’s a lesson that was heeded by his successor, Canelo Alvarez, who waited for Gennady Golovkin to show signs of slowing down before stepping into the ring with ‘Triple G’. Canelo has since made a habit of trying to pick off weaker belt-holders in each division first (although his team miscalculated when he stepped up to challenge Dmitry Bivol at 175lb).

In a way both Alvarez and Mayweather followed a depressing modern pound-for-pound pattern: get to the top, then protect your spot. As sublimely gifted as Roy Jones was, he fought so many mismatches in his prime – including an actual policeman, Richard Frazier, in 1999 – that desperate fans and media suggested a ‘Roycott’ (boycotting Jones’s fights until he took on someone worthy).

Two of Usyk’s contenders for the P4P top spot – Terence Crawford and Errol Spence – cannot seem to find a way to share a ring together despite being 34 and 32 respectively. Hopefully that changes this year but with Usyk there is no ‘hope’: there is the rock-solid fact that he will take on the very best, anywhere in the world, without question or drama.

Usyk has been the pre-fight underdog twice in his career (narrowly before he beat Murat Gassiev in Russia; more steeply before he sunk AJ in Tottenham). If Usyk takes on Fury before the end of the year – as seems likely – he will once again step into the ring with the odds against him. Mayweather, by contrast, was the pre-fight favourite in every single one of his 50 pro fights.

Cynics might suggest that boxers like Mayweather and Canelo, who more cunningly protected their no.1 pound-for-pound status, were in a better position to do so. As global box-office draws, they could afford to be picky about who they fought – to leave their most dangerous rivals to pass their prime while getting paid millions for taking on weaker foes.

That option isn’t open to Usyk, a hero in his homeland and beloved of the boxing hardcore but not somebody who could sellout a Las Vegas arena before his opponent is even named. Hence why he has travelled Europe as the B-side, the sport’s ultimate road warrior defeating hometown favourites in front of hostile crowds and – occasionally – unfriendly judges.

Pacquiao had a similar take-on-all-comers attitude, which helps explain why his incredible fight CV is pock-marked by several defeats. Yet Usyk, despite displaying the same approach of avoiding nobody, is a flawless 20-0.

Even now, Usyk fights with the disadvantage of being naturally several stone lighter than the heavyweights he challenges. Not exactly a KO artist at cruiserweight, Usyk now steps into the ring each time with far bigger men relying each time on his skills, his boxing IQ, his stamina and his heart to lead him to victory.

Next up Usyk wants, literally, the biggest challenge of them all: Fury, a man who’s six inches taller than him, around 50lb heavier than him, who can – almost – match him for skills and clearly exceed him when it comes to strength and knockout power.

Usyk might appear an unlikely pound-for-pound no.1, this quirky Cossack warrior who dances, sings and carries around his daughter’s stuffed Eeyore for the duration of a fight week. It jars with the slick PR machinery that helped propel the likes of De La Hoya, Mayweather and Canelo to the top of the pound-for-pound mountain.

But boxing doesn’t just require its fighters to show courage inside the ropes, it needs them to show bravery in their matchmaking. To be willing to take on the very best, no matter what, and deliver the fights we all want. Joshua himself deserves immense credit for taking on Usyk when plenty of A-side superstars would have dropped belts to avoid him.

However, in defeating AJ twice then immediately laying down an all-or-nothing ultimatum to Britain’s other heavyweight giant, Usyk has shown a fearless appetite to face the best. It is this outside the ring boldness, rather than his in-ring gifts, that sets Usyk apart from so many of his pound-for-pound predecessors. 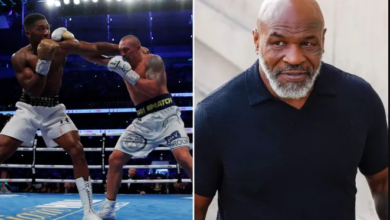 What Happened Between Amir Khan and Anthony Joshua? 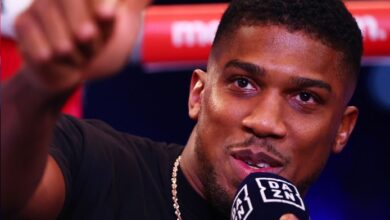 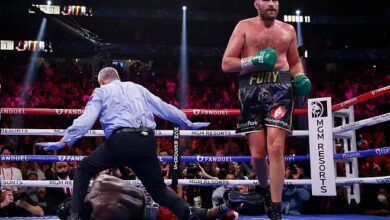