Tyson Fury and Deontay Wilder have very rarely agreed on much over the years, but they can come together with their take on Anthony Joshua’s doomed fight with the American in 2018.

At the time, talks were reportedly intensifying for a world title unification between Wilder, who had the WBC heavyweight title, and Joshua who held the rest of the major belts with the WBA, WBO and IBF, as well as the less prestigious IBO title. But the bout never took place, with Joshua’s team claiming that the deal was never particularly close.

But after Fury’s side spent the last few weeks locked in contract talks with Joshua’s for a bout on December 3 at the Principality Stadium in Cardiff, he began to understand first-hand why his British rival’s team were unable to make the Wilder fight. He has previously praised the Americans for making their two fight deals handily in 2018 and 2020.

“We all know Joshua wouldn’t fight Wilder for $50 million back in the day,” Fury told SecondsOut. “We all knew that. My lawyer has seen the money, the $50 million from [Wilder’s advisor] Al Haymon. That was real. Yeah. And he s*** himself yet again. He has never fought somebody who is going to beat him.

“I’ll tell you what else they can’t do, these control freaks. They can’t go on someone else’s show because their ego is too big. This was not Joshua versus Fury, because Fury does not have three losses. This was Fury-Joshua, and it was all my show. So, for them to turn up with their massive ego and play ball and be the opponent, they’re not going to do it. They wouldn’t do it for the $50m against Wilder to go to America and fight Wilder as a Wilder versus Joshua show.”

Tyson Fury and Deontay Wilder have fought three times, while Anthony Joshua has fought neither man (

Wilder has previously, however, claimed that after drawing with Fury in their first fight that he turned down a Joshua fight in order to commit to a rematch. Joshua’s promoter Eddie Hearn as well as the fighter himself mocked Wilder for a tweet he posted amid his lengthy feud with Fury where he admitted to the situation.

“When that fight was a draw, I told you that I would give you a rematch,” Wilder tweeted in October 2020 when it appeared that a trilogy fight could be slipping out of reach. “You know I was offered more money to fight Joshua than I was getting to fight you. Again being a man of my word, I fought you like I said I would…”

Ultimately, the deal Fury signed for his rematch with Wilder ended up costing Fury a fight with Joshua last year when he was forced by an arbitrator to give the American a third bout. In the meantime, Joshua had to defend his belt against mandatory challenger Oleksandr Usyk who dethroned him and won their contractually obligated rematch. 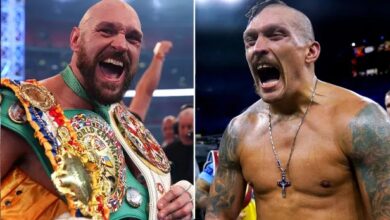